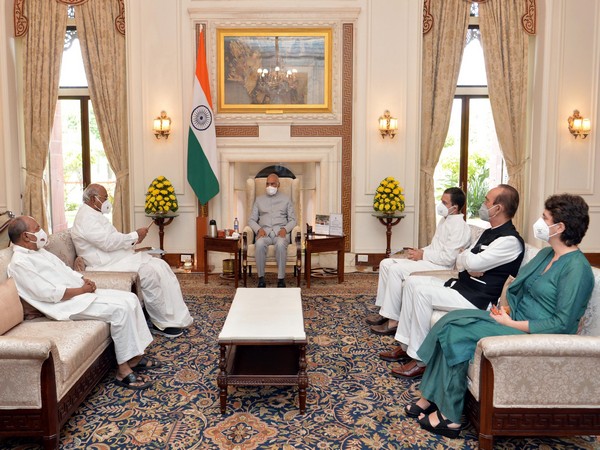 The delegation which included Priyanka Gandhi Vadra, AK Antony, Mallikarjun Kharge, and Ghulam Nabi Azad requested the President "direct an independent judicial investigation by a Commission comprising of two sitting judges of the Supreme Court of India or the High Court," says the Memorandum.
The memorandum submitted by the Congress party expressed an apprehension that no "police official would dare to fairly investigate the son of Union MoS Home Affairs with the father occupying a position of such high influence and who enjoys continued endorsements from both the Central and the State Governments."
Therefore, Congress requested the president "to immediately dismiss Union MoS Home Affairs, Sh. Ajay Mishra Teni," mentions the Memorandum submitted to the President.
The memorandum also included the criminal history associated with the MoS Home Affairs Teni and his reportedly viral controversial speech given before the October 3 incident.
"It is pertinent to note here that the Union MoS for Home Affairs, Sh. Ajay Mishra Teni also stands accused of murder. While the District Court had acquitted him, a criminal appeal (no. 1624 of 2004) against his acquittal is pending in Allahabad High Court since 2004. What is even more shocking and unbelievable is that the High Court had reserved judgment in the Criminal Appeal on March 12th, 2018 but hasn't delivered the verdict till date. 3 years and 7 months have passed since. Justice has been delayed to the point where it has effectively been denied," says the Memorandum.
"It is important to note that on September 27th, 2021, the day of the Bharat Bandh called by protesting farmers against the three black laws, Shri Ajay Mishra Teni, MoS Home Affairs, in a public function openly threatened the agitating farmers and even boasted about his dubious antecedents," It added.
Referring to the protest against the three farm laws that has been going in some parts of the country for some time now, Congress accused the central government of refusing to have a meaningful conversation with them and appears to be applying the policy of "tire & retire" the farmers.
"Lakhs of farmers have been protesting the three "black farm laws" at the doorstep of the National Capital of Delhi for close to a year now. They have braved extreme weather - rain, extreme heat and cold, yet their resolve remains undiminished. Close to a thousand farmers have lost their lives but their determination to seek justice in a Gandhian way remains firm. The Modi Government has refused to relent or have a meaningful conversation with them. Their policy appears to be "tire & retire" the Anndatas, a strategy doomed to failure," said the formal submission by the Congress party.
Rahul Gandhi and Priyanka Gandhi have earlier visited the family of victims of the Lakhimpur Kheri incident. As many as eight people including four farmers had died in the violence that took place on October 3. Uttar Pradesh police have so far arrested three people including the son of Union Minister of State Ajay Mishra Teni's son Ashish Mishra.
Samyukta Kisan Morcha (SKM), a body of several farmer unions, had issued a statement regarding the incident and alleged that one of the four farmers was shot dead by Ashish Mishra, while the others had been allegedly run over by the vehicles of his convoy.
Refuting SKM's allegations, MoS Teni said that his son was not present at the spot, adding that some miscreants merged with protesting farmers and pelted stones on the car, which lead to the 'unfortunate incident'. Ashish Mishra also refuted SKM's allegations and reiterated his absence at the spot where the incident took place. (ANI)