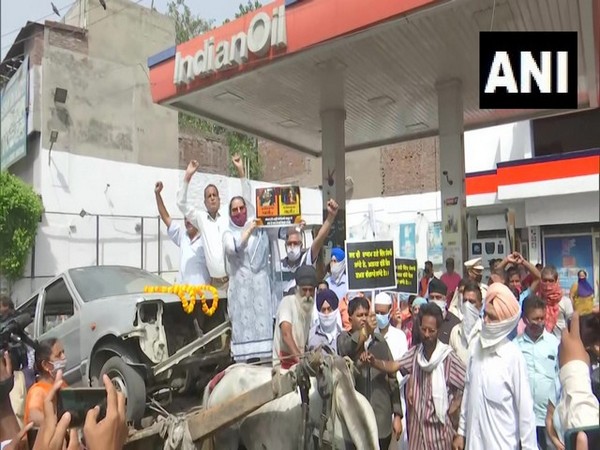 New Delhi [India], June 11 (ANI): The Congress held a nationwide protest on Friday in view of the rising prices of petrol and diesel.
Congress leaders along with party workers demonstrated across the country holding placards and raising slogans against the central government.

Speaking to ANI, Congress general secretary KC Venugopal said, "Modi government should stop looting the common people of the country. In the last five months, they have increased the fuel prices 44 times. On one side people are suffering from the COVID pandemic and on the other, the government is increasing fuel prices. We are asking the government to give at least Rs 6,000 to poor people."
He said in around 250 cities petrol price is more than Rs 100 and the government has increased excise duty many times.
"They are busy constructing the central vista project. When UPA was in power, the tax on petrol and diesel was Rs 9.20. Now it is Rs 32. We demand complete rollback of excise duty hike on petrol-diesel. Fuel should come under the purview of GST," added Venugopal led the demonstration in the national capital.
In Bhopal, senior leader Digvijaya Singh led the protest.
"At least Rs 25 can be reduced in fuel prices by cutting excise duty. Where are those who once used to criticise the UPA government over fuel price hikes? With rising fuel prices, consumer goods are also getting expensive," Digvijaya Singh told ANI.
In Punjab's Amritsar, Congress workers demonstrated by carrying a scrapped car on a bullock cart.
Tamil Nadu Congress president KS Alagiri along with party workers held a protest in Kilpauk, Chennai against rising fuel prices. (ANI)