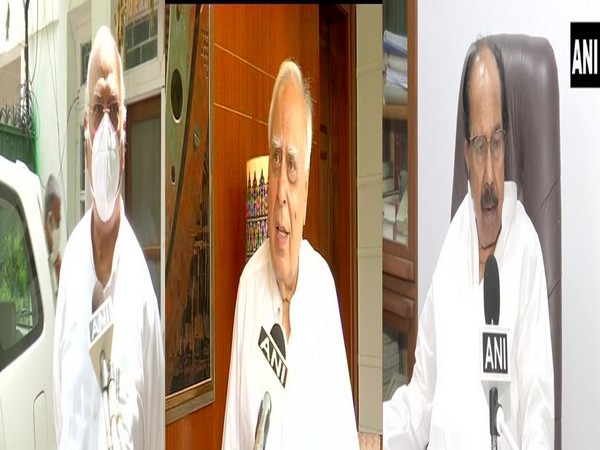 New Delhi [India], June 10 (ANI): Even as senior Congress leaders have slammed former union minister Jitin Prasada for joining BJP, they have also called for "major surgery" and "strengthening feedback" to chart out the way forward for the party which has seen a series of electoral reverses and some senior leaders walking away.

Former union minister and party leader Veerappa Moily said that people with competence and mass base should be given charge of various states.
Slamming Prasada, Moily said he was a casteist and responsibility should be given to people steeped in party ideology.
"He was always a suspect. He isn't secular. He was casteist and wanted to perpetuate casteist politics in Uttar Pradesh. He was given many posts. Responsibility should be given to people who are committed to party ideology," Moily told ANI.
"Congress needs to undergo major surgery. People with competence and mass base should be given charge of various states," he added.
Prasada joined BJP on Wednesday after spending decades in Congress.
Congress leader Mallikarjun Kharge said the party gave Prasada both respect and responsibility and he should not put any blame on the Congress.
"Jitin Prasada was traditional Congressman. We gave him respect, he wasn't ignored. He was West Bengal in-charge, was allowed to contest every time. Despite this, if he blames Congress and its ideology for which he and his father worked, it's sad," Kharge said.
Responding to Kharge's comment, Jitin Prasada told ANI that he looked at the situation in Uttar Pradesh and took a considered decision to leave Congress.
"What can I say? He (Kharge) is such a senior leader but I know the situation in Uttar Pradesh and the connection between people and Congress. I decided this after thinking everything," he said.
Congress leader Kapil Sibal slammed Prasada over his decision to join the BJP and said it shows "we are moving from 'Aaya Ram Gaya Ram' towards "Prasada politics" in which "you join that party which is giving you 'prasad' (reward)".
Sibal told ANI that there might be the reason for Prasada to leave Congress which he has not disclosed but is unable to understand why the former minister joined the BJP.
"Joining BJP is something I cannot understand. It shows we are moving from 'Aaya Ram Gaya Ram' to 'Prasada' politics, in which where you get 'prasad', you join that party," he said.
Sibal said he would never join the BJP even if Congress tells him that they do not need his services.
Referring to group of 23 leaders who had written to Congress President Sonia Gandhi last August calling for sweeping reforms "full time and effective leadership" and elections to the CWC, Sibal said "we are true Congressmen".
Incidentally, Prasada, who joined the BJP on Wednesday after long years in Congress, was also among the 23 signatories to the letter.
Sibal said he will never think of joining BJP.
"As far we are concerned, we are true congressmen. I will never in my life even think of joining the BJP, over my dead body. It could be that Congress leadership informs me, look we don't need you anymore. I might think of leaving the party but never in my life join BJP because how do I justify it to myself," Sibal said.
"Why would I join another party? For prasad. We are not doing politics for prasad, we do it based on our ideology. That's the reason the group of 23 raised this issue to reform our party. Listen to us. Our G22 leaders, they want to take forward the ideology of Congress, we all are of the same ideology," he added.
Sibal said it is vital to listen to people in a party and chose the path forward after due analysis.
"In life whether it's corporate life, personal life, if you stop listening the output will not be good. The basic principle of politics is to listen to the people and then decide how to move forward.
All should be heard, young, middle-aged and people who are in the party for long time, because everyone will have their view point. Then with the full analysis, you will move forward on the right path. If you don't listen, you will go on the wrong path," he said.
Prasada's departure is a fresh blow to the Congress party after heavyweight leader of Jyotiraditya Scindia joined the BJP in March 2020.
Prasada has joined the BJP ahead of Uttar Pradesh assembly polls early next year and his decision is being seen as a jolt to the Congress which was trying to revive itself in the crucial state under the guidance of party general secretary Priyanka Gandhi Vadra.
Prasada was among the young frontline leaders of the Congress, especially in Uttar Pradesh. (ANI)