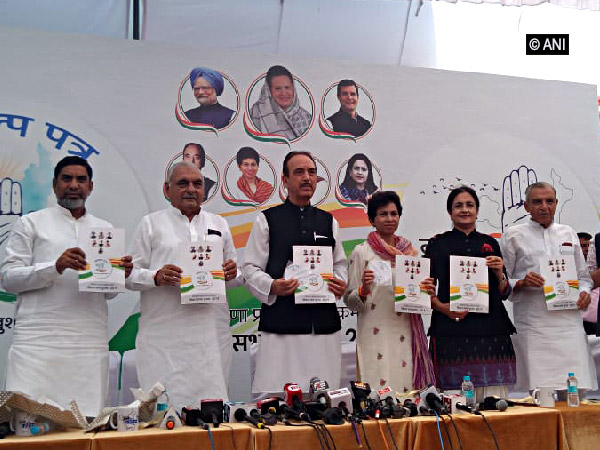 The manifesto, released by Congress general secretary Ghulam Nabi Azad, state Congress chief Kumari Selja and former state chief minister Bhupinder Singh Hooda and several other leaders at a press conference here, has sops to woo various sections including the farmers, women, Dalits and youth.
In a big promise, the party said its government will pay an allowance of Rs 7,000 per month for graduates and Rs 10,000 per month for post-graduates till they get employment.
"Every family will get one job according to qualifications," it said.
The manifesto said that loan waiver will be implemented within days if the party comes to power. "If crop of a farmer gets destroyed by a natural calamity, he would be paid a compensation of Rs 12,000 per acre," it says.
Apart from 33 per cent reservation in Haryana government jobs, they have been promised free rides for women in Haryana Roadways buses. The manifesto says that pregnant women will get Rs 3,500 per month till the birth of the child and Rs 5,000 per month until the child reaches the age of five.
Referring to Dalit and backaward sections, the manifesto promises a scholarship of Rs 12,000 annually for Dalit students from classes 1 to 10th and Rs 15,000 annually for students of classes 11 and 12. It promises the reconstitution of Scheduled Castes Commission.
The party has promised to increase creamy layer limit for backward classes from Rs 6 lakh to Rs 8 lakh.
The Congress said that if they came to power then they will open government canteens named Indira Rasoi for poor people in every tehsil where meals will be made available at Rs 10 per plate.
The party has also promised to provide an old-age pension of Rs 5,100 per month for all. The age for receiving an old-age pension will be made 58 for males and 55 for females.
The manifesto stated that to provide free travel for the elderly in Haryana roadways and reducing the domestic electricity rates above 300 units per month to half and free for people who would consume below 300 units.
The party promised to provide health cards to every resident of the state along with free treatment to the poor.
Congress is seeking to oust the BJP government in the state. Polling in Haryana is scheduled to take place on October 21 and counting of votes will take place on October 24. (ANI)