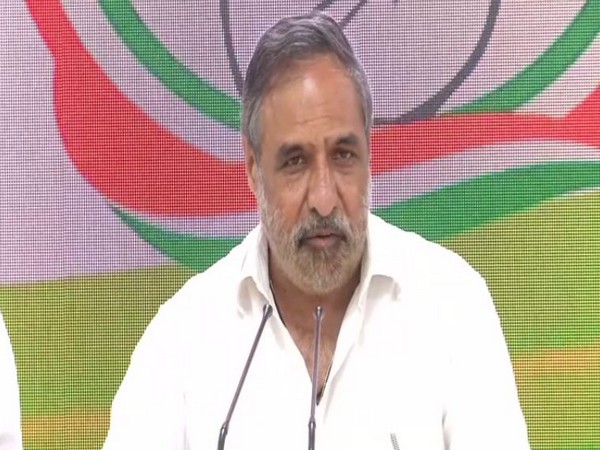 New Delhi [India], Oct 12 (ANI): The Congress party on Saturday accused the BJP-led Central government of monumental mismanagement of the economy, saying it has moved from "recession to crisis mode" and the fiscal deficit was far more than the estimates.
Addressing a press conference here, party leader Anand Sharma said the government in its second term was expected to address the problems of agrarian distress and give a boost to the economy but there has been a crash in production, the collapse of demand and huge number of layoffs.

Sharma also targeted Finance Minister Nirmala Sitharaman over slow down in the economy and alleged that she does not understand the 'e' of economy or the 'f' of finance.
He said that passenger vehicle sales had come down by 23.7 per cent in September.
"Capital goods formation, if it was hovering around zero for the most part of this government, now it has collapsed and is the lowest since 2012. The manufacturing has hit a five-year low. There is a contraction in industrial output. It is minus 1.1 per cent," he said.
Sharma said the capacity utilisation of factories was not above 60 per cent, which has led to a large number of retrenchments in sectors such as auto, textiles, and leather, which are all labour intensive.
He said the auto ancillary sector, where India is a global leader, has also been badly hit.
"Not only the numbers are shocking but we know the government has failed to deliver despite fall in commodity prices since 2014. The windfall gain of this government only from petroleum products has been more than Rs 2.6 lakh crore per annum," he said.
Sharma said if about Rs 10 lakh crore of GST refunds, refund to exporters and unpaid bills of PSUs are added than "fiscal deficit is not 3.3 per cent. It is beyond 8 per cent".
He said direct and indirect collections were nowhere near the half-way mark.
"The government is guilty of monumental mismanagement of Indian economy. We are staring at a huge revenue shortfall. Where will the GST come when factories are shutting down and production has been scaled down by factories," he said.
"When you have complete collapse of all four engines of the Indian economy, we can only term it as a crisis," he said, adding the credit flow to the commercial sector has come down by 88 per cent.
"It is unheard of in Independent India. Then you have bank frauds," he said.
Targeting Sitharaman, he said: "Our sympathies are with the country that we have a Finance Minister who is clueless, and who does not understand 'e' of the economy or the 'f' of finance."
He alleged that she was not addressing "grim situation confronting the economy" and crony-capitalism was being promoted, tax cuts were being given to the richest people and there was no relief to the poor. He also alleged brazen misuse of government agencies. (ANI)