Covid-19 has changed human lives, but we must not stand still, says Kazakh President Tokayev 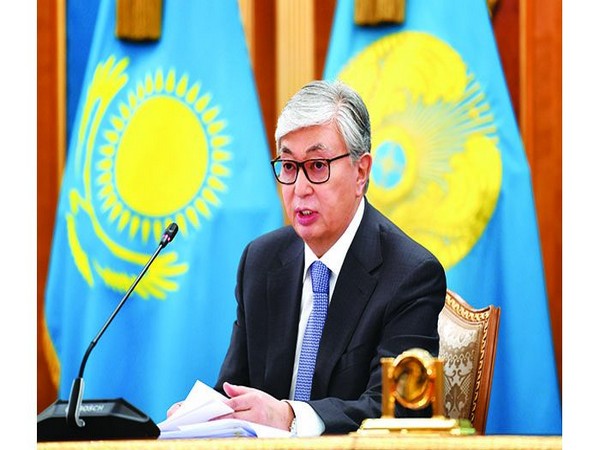 Nur-Sultan [Kazakhstan], June 29 (ANI): Distancing himself from the notion that the world has lost the fight against the Covid-19 pandemic and the governments across borders have lost control over the situation, Kazakh President Kassym-Jomart Tokayev stressed indeed the situation has changed the usual way of human life but "we must not stand still, otherwise we will slide into stagnation" with all the consequences for statehood as development and prosperity of Kazakhstan is "exclusively in our hands".

In a detailed interview with local newspaper Ana Tili, Tokayev deliberated extensively on the pandemic.
He said, "Indeed, the pandemic has changed the usual way of life not only of our compatriots but of all humankind. We have witnessed that even the most developed states were helpless in the face of a serious illness. Leading European countries, the United States, Asian giants - China, Japan, South Korea, and many others found themselves in an extremely difficult situation. I consider the argument that 'we are losing in the fight against the epidemic, and the Government has lost control over the situation', incorrect."
"As you know, in the cities of Nur-Sultan, Almaty and Shymkent three hospitals focusing on infectious diseases were built quickly. Clinics in other regions were equipped with the necessary equipment. Our doctors have the necessary knowledge to treat patients," he added.
He also noted that doctors are selflessly fighting the pandemic when asked whether the Government had ceased to control the spread of the epidemic because there were not enough places in the hospitals.
Speaking further on this issue, Tokayev noted that everyone is breathing the same air, experiencing the same problems, so no one can fully defend themselves against this disease.
"A pandemic does not recognize boundaries. Only by taking care of themselves and their loved ones can the people be protected from the disease. This is a passing phenomenon, the difficulties are temporary," he said.
In view of the above, the President urged citizens to strictly observe the quarantine regime and to carefully consider sanitary and hygienic requirements.
"We must not stand still, otherwise we will slide into stagnation with all the consequences for statehood. We must never forget the simple truth that in this complex, multidimensional world, we Kazakhs are, by and large, not needed by anyone. We need only our own country. Moreover, ill-wishers such as politicians and even states that are not happy about the success of Kazakhstan have not disappeared. In other words, the development and prosperity of Kazakhstan is exclusively in our hands. We have no right to make a mistake because the destiny of the Kazakh people is on the scales of history," he said further.
In the interview, the President also emphasized the importance of revising the attitude of society to creative work. According to Tokayev, every work should be held in high esteem.
Overall, according to Tokayev, the global situation does not stand still, the geopolitical aspirations of the leading powers are changing. Amid these conditions, Kazakhstan is obliged to take care of its national interests.
Tokayev admitted that the past year of the presidency was really not easy for him. It is possible to say that this was a year of overcoming difficult trials, the President said, adding that he always felt the support of the people, and this gave him strength and confidence in the ultimate success of such a complex matter as government.
During the year, many reforms were carried out in the political and economic fields of the country. According to Tokayev, this policy will continue while he inculcates new ideas in this important process. (ANI)