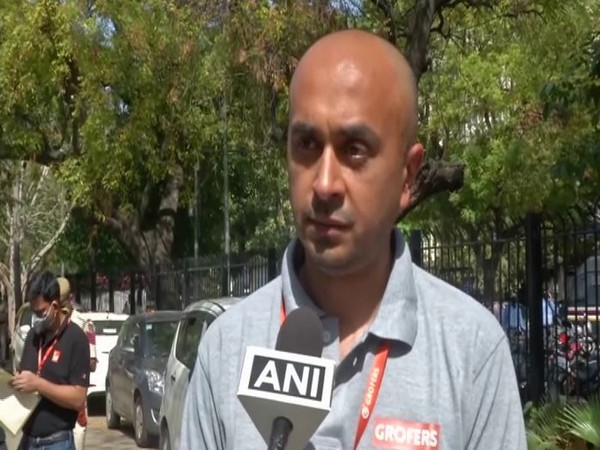 New Delhi [India], Mar 26 (ANI): The heads of several e-commerce companies on Wednesday met Delhi's Additional Commissioner of Police, MS Randhawa, to address the problems regarding the delivery of their services following the nationwide lockdown to combat COVID-19.

Speaking to ANI, Firoze from Delhivery Pvt Ltd, said: "Right now, the problem is that our centres are not opening and people themselves are hesitant to come, because they do not know if the permissions are obtained. However, the police have assured us that these warehouses will remain operational and people can come and deliver goods to people."
He said that the company will start delivering essential goods, such as food and medicines immediately.
Vineet from Big Basket also had to face some hardships after the lockdown, such as constant interruption of services.
"From the last 2-3 days, we are facing a lot of issues in our warehouses. Our operations are getting interrupted, especially the vans coming from other states. Furthermore, the police have also been asking us to shut down our warehouses, and people coming from different areas are not being able to report in their shifts."
Vineet stated that after the meeting, he is hopeful that some curfew passes would be issued for the company, and that it will be able to restart operations and serve people.
"Passes may not be enough, but at least we can start our operations," he added.
He also said that instances of people getting stopped and even manhandled, was reported to Randhawa.
Albinder Dhindsa, CEO, Grofers, also mentioned the problems of his company, specifically regarding delivery to the customers.
"We have given Delhi Police our opinions on the issues we are facing currently. The priority here is that the goods which are being supplied from other states should be delivered to their homes, so that the citizens do not feel the need to venture out of their homes. The police will issue passes for us, in order to smoothen the movement of goods in the capital," he told ANI.
He further stated that the price of goods will not change, as the shortage of supplies was not an issue.
The government had earlier said that all shops, commercial establishments, factories, workshops, offices, godowns, weekly markets shall stop their operations and only essential services and establishments have been exempted from the lockdown.
"For the movement of persons involved in the essential good and services, the concerned Delhi based organisations have to get the curfew passes from their respective district police headquarters," added the police.
Prime Minister Narendra Modi on Tuesday announced a 21-day lockdown in the entire country effective from midnight to deal with the spread of coronavirus, saying that "social distancing" is the only option to deal with the disease, which spreads rapidly.
According to the Health Ministry, the total number of positive COVID-19 cases in India reached 606, including 43 foreign nationals. (ANI)