COVID-19: This is how Mukhtar Abbas Naqvi keeps himself engaged during lockdown 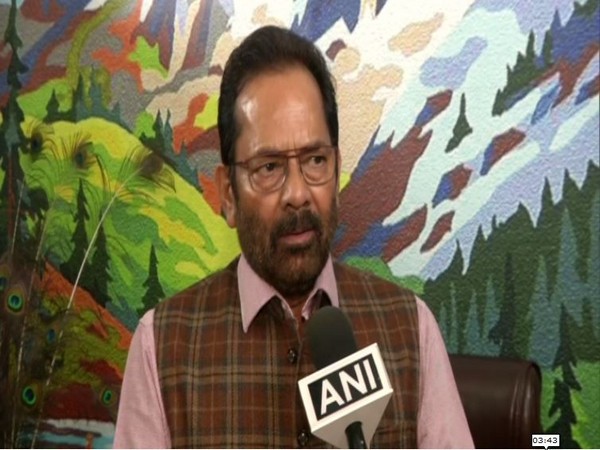 By Brajendra Nath Singh
New Delhi [India], Mar 26 (ANI): Following the order of lockdown in view of COVID-19, most of the ministers in the Narendra Modi-led BJP government confined themselves in their bungalows and are using different methods to exercise their duties as public representatives.

Many of them have come up with unique ways to utilise their time at homes to interact with people and are coming out of their residences only when unavoidable.
Union Minister for Minority Affairs, Mukhtar Abbas Naqvi, one of the busiest ministers in the central government, who regularly meets hundreds of people at his official residence on Safdarjung Road, has also confined himself at his home and is doing everything to keep himself engaged.
Although performing yogas and gardening are his routine works, his responsibilities have increased as none of his staff are coming at this time of crisis. After routine works, he is cleaning his rooms and gardens.
After breakfast, he reads online newspaper, books and talks to people over the phone.
"Sometimes we remain busy with official works and sometimes in Parliament. But at this time of lockdown, I am trying to utilise my time to the maximum. I am spending time at home, reading books, doing gardening and cleaning. I am also interacting with officials over the phone and directing them," Naqvi told ANI.
Naqvi has also been given the charge of Jharkhand by Prime Minister Narendra Modi as to how the state is fighting against the novel coronavirus.
"I have been in touch with District Magistrates (DMs) and Senior Superintendents of Police (SSPs) and taking stock of the situation in the state. They are following the government's orders strictly and the government is also helping them when the need arises," Naqvi said.
Talking to DM of Chatra (Jharkhand), Naqvi took stock of the situation in the Naxal-affected district and looked satisfied with the steps being taken by the local administration.
"Chatra DM just informed me that there has not been a single case of coronavirus in the district. It means they are taking every measure to stop the spread. The Prime Minister himself is monitoring the situation very closely. We also keep him informed about the situation in the states," he said.
Naqvi said in the fight against COVID-19, the people need to exercise resolve and restraint and stressed that without their support the government cannot fight with this "unknown enemy".
"Today, we need to fight unitedly with a resolve. If we take care of ourselves, coronavirus cannot damage us. We have to fight with a strong determination," he said.
Every day, Naqvi meets hundreds of people at his home but when the ANI team reached his residence on the second day of lockdown, the rooms were empty. The minister was seen busy with his daily routine.
Asked what was his favorite time pass during the lockdown, Naqvi said, "It is best when one can utilize their time. I never do time pass. I always utilise my time and that is what I doing now."
He also urged the people to follow government orders and obey the rules.
"If someone is thinking that COVID-19 cannot do anything to them then he is living in a fool's paradise. People must follow government orders and keep themselves isolated. Don't go in crowds. Keep sanitising," the minister outlined.
Naqvi also cautioned the public to beware of fake news and false information being circulated on social media and urged them to listen to the government. (ANI)