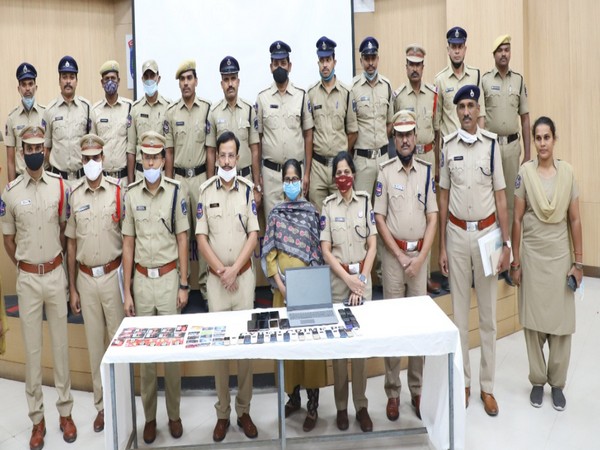 Cyberabad (Telangana) [India], November 21 (ANI): A gang of eight who cheated the public and extracted money out of them from fake dating websites were arrested on Friday by Cyber Crime Police. Police have also seized a laptop, 31 Samsung mobile phones, six documents pertaining to the crime, and 12 ATM cards.

According to the Commissioner of Police, Cyberabad, police, VC Sajjanar, the gang created many websites and extracted money from the public mentioning various kinds of fees. The accused persons have been arrested and identified as Bijay Kumar Sah, Binod Kumar, Mohamad Nur Alam Ansari, Deepa Haldar, and Shikha Halder. Three others named Santhu Das, Amit Paul, and Sushank Kumar Sah are still absconding.
The issue came into the light after the Police received a complaint from a person stating that he was assured of a male escort job himself in the Indian Escort Service Pvt. Ltd., Kolkata after he registered himself on the dating website.
The complainant said that post-registration, he received calls from various numbers and that he assured of a male escort job, for which he was asked to pay various amounts. "Believing the accused, the complainant paid them a staggering amount of Rs. 13,82,643 into their accounts towards things like joining fees, product purchase fees, late fees, GST, insurance fee, refund amount fee, and other fees He was again asked to pay Rs. 1,50,000 for bank clearance upon which the complainant realized that he was being cheated and then requested police legal action," Sajjanar said.
Based on the complaints, cases were registered with the Cyber Crime Police, which worked out the clues sent a team to Siliguri in West Bengal and a raid was conducted at call centers where the accused were working.
A case is registered with the requisite sections and further investigation is underway. (ANI)