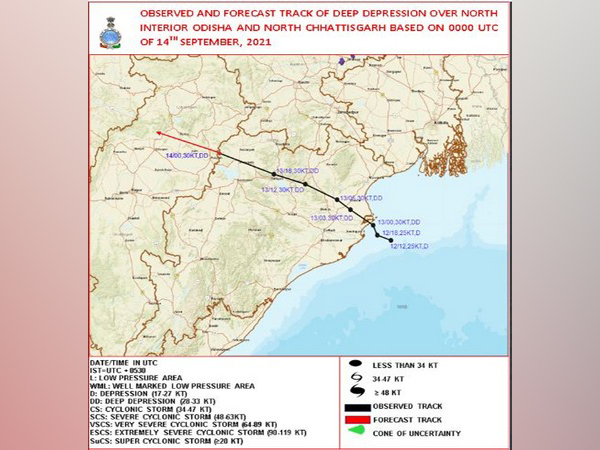 New Delhi [India], September 14 (ANI): A deep depression centring over north interior Odisha and adjoining north Chhattisgarh will weaken into a depression during the next six hours, informed the India Meteorological Department (IMD) on Tuesday.

"Deep depression lay centred at 05.30 hrs IST of September 14, 2021, over north interior Odisha and adjoining north Chhattisgarh about 50 km west-northwest of Jharsiguda and about 130 km south-southeast of Ambikapur. To weaken into a depression during the next six hours," tweeted IMD.
Earlier on Monday, IMD informed that a depression over the Bay of Bengal intensified into a deep depression and crossed the Odisha coast bringing heavy rains in several parts of the west coast and Central India.
It also issued a red alert in seven districts, an orange alert in six districts and a yellow alert in eight districts of Odisha due to heavy rains. (ANI)