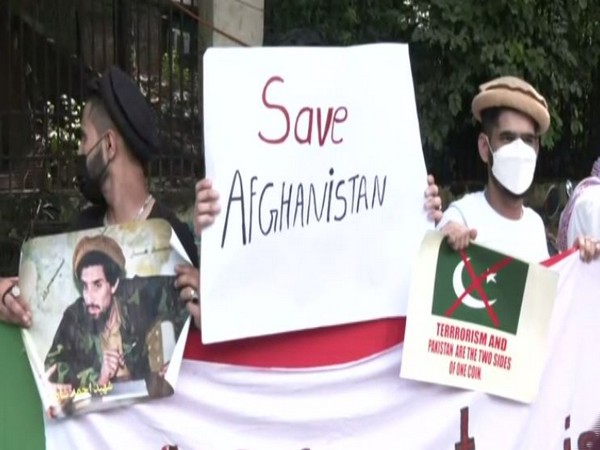 New Delhi [India] September 14 (ANI): Afghan refugees on Tuesday held a demonstration in Delhi against the Taliban in which they also raised anti-Pakistan slogans.

The protesters carried placards that read "Terrorism and Pakistan are same side of a coin" and "ISI leave Afghanistan" and raised slogans against the Taliban.
"My relatives were living in Panjshir. Pakistan airforce killed my relatives, my cousins, that is why we are here to protest against Pakistan," a protestor informed ANI.
"The ISI is interfering in our country. ISI Chief went to Afghanistan (during the takeover)," another protester, Sapur told ANI.
"We want India to support us against Pak terrorism. We are protesting against the Taliban and ISI," he added.
Protesters also raised slogans in favour of the Afghan resistance movement.
A few days ago, Afghans living in Germany also held a protest demanding that women's rights should be protected, along with freedom, human rights and civil rights, Pajhwok Afghan News reported.
Earlier on August 15, when the Taliban gained control over the capital city of Kabul, anti-Pakistan protests across the globe were organised against Islamabad's role in helping the Taliban.
Protests were held in the US, Australia, Canada, the UK, and Austria against the Taliban, denouncing their aggressive advance and barbaric acts in Afghanistan. Protesters also called for sanctions against Pakistan for their proxy war in Afghanistan. (ANI)