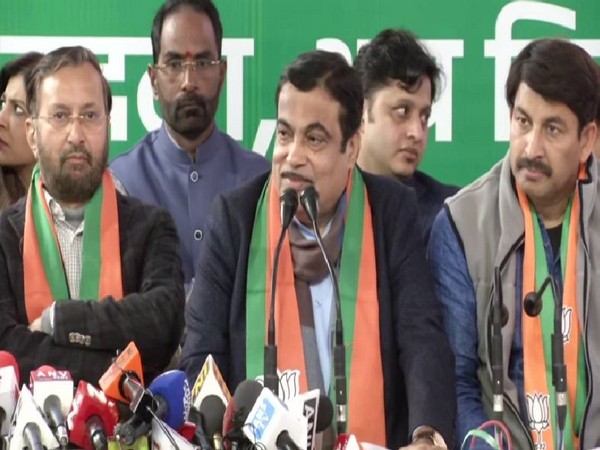 Releasing the party's manifesto for the February 8 Delhi Assembly elections, Gadkari said that the BJP's central government had decided in 2014 itself to free Delhi of air and water pollution, and has taken a number of steps in this direction.
"When our government was formed under Prime Minister Narendra Modi in 2014, the biggest challenges facing Delhi were air pollution and water pollution. We decided to rid Delhi of these twin evils," Gadkari said.
"We included 40 rivers in the 'Namami Gange' programme along with the Ganga. Yamuna was one of the rivers included in the programme. Around Rs 6,000 crore has been spent on purifying the Yamuna whose benefit has been accrued to Delhi as well," the senior BJP leader said.
He underlined that the manifesto for the Delhi Assembly elections 2020 is based on the "politics of development and progress".
"We have consulted 11 lakh people in developing the manifesto for Delhi Assembly elections for 2020. It is based on the politics of development and progress. If the government of India is so powerful then Delhi also needs a BJP ruled government for development in the future," he said.
Gadkari further said that the second important work that the BJP-led Union government did for Delhi was to work on Lakhwar multipurpose project to resolve the drinking water crisis in the region.
"There has a tug-of-war since 1970 among the states of Delhi, Himachal Pradesh, Haryana, Uttar Pradesh and Rajasthan over drinking water. If this issue is resolved then Delhi will not face any problem with drinking water till 2070. The cost of the project is Rs 6,000 crore out of which 90 per cent of the cost is borne by the Union government," Gadkari said.
The Union Minister further talked about the development of road projects which benefitted Delhi and played a role in reducing air pollution levels in the national capital.
"The trucks that used to go to and from Punjab, Haryana, Himachal Pradesh, Jammu and Kashmir, Gujarat, Maharashtra and Uttar Pradesh used to traverse through Delhi for reaching their destination. We built the western peripheral and eastern peripheral ring roads thanks to which these trucks do not have to enter Delhi now. Due to this air pollution as well as the number of accidents have come down," he said.
"Many other road projects have also been taken up which have benefitted Delhi. We have started work on a highway between Delhi and Mumbai at the cost of over Rs 1,00,000 crore. This will cross through tribal areas in Rajasthan, Madhya Pradesh, Gujarat, and Maharashtra and reduce the journey time between the two megacities to 12 hours," the former BJP president added.
Assembly elections are scheduled to be held in Delhi on February 8 and counting of votes will take place on February 11. (ANI)