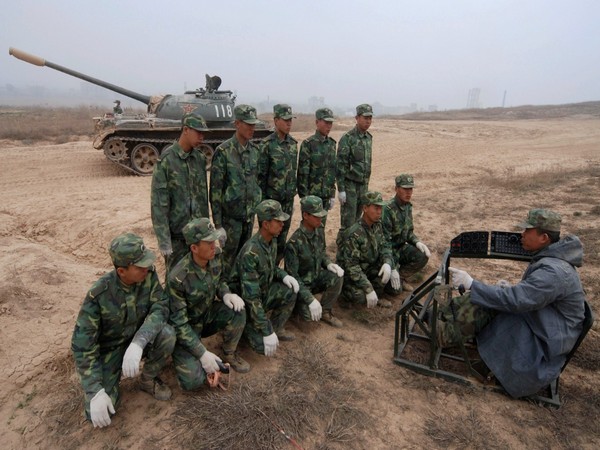 Beijing [China], September 15 (ANI): China's rising arms, ammunition and advanced weapons indicate that the communist regime has enhanced its military capabilities and made its forces more advanced. However, despite having advanced weapons, Chinese forces can't fight at high altitudes, a media report said on Tuesday.

The effectiveness of the new weapons and their live-fire exercises may ultimately be of little consequence, given that China may lack the means to successfully transport the assets at high altitudes and achieve the needed combat manoeuvre capacity, US-based magazine National Interest reported on Tuesday.
In its latest efforts to demonstrate its military capabilities, the People's Liberation Army nowadays fired off new rockets and artillery in its Western plateau region.
PLA fired off its new PHL-11 self-propelled multiple rocket launcher, PCL-161 self-propelled howitzer, and PHL-03 long-range multiple rocket launcher, according to Chinese Communist Party mouthpiece The Global Times. The weapons conducted numerous live-fire exercises at high altitudes, the report said.
During the exercise, the emerging Chinese weapons intended to refine the PLA's ability to conduct precision-manoeuvre warfare at high altitudes in mountainous terrain.
But China potentially lacks anything like the US Chinook helicopter, which is able to airdrop mobile artillery or rocket launcher systems. In this case, the existence of new and advanced weapons systems may face a deployment problem at high altitudes. It's a possible obstacle for a Chinese force that might have few options when it comes to deploying this kind of land firepower at mountainous altitudes greater than five thousand feet, National Interest said.
Beijing has Z-8 cargo transport helicopters. These are is reported to operate with about one-half of the maximum take-off weight of the US Army's CH-47 Chinook.
So far, the information publically available claims that Z-8's maximum take-off weight is twenty-eight thousand pounds. Whereas Chinook can take off with as much as fifty thousand pounds.
It signals that the Chinese military may be facing challenges while moving its ground war forces and assets around mountainous areas.

Chinook has been successfully deploying heavy machines and howitzers up into mountainous. A Chinook helicopter can carry an M777 mobile Howitzer or even several tactical wheeled vehicles up into mountainous areas to airdrop firepower.
Beijing also has Y-20 cargo aircraft as a fixed-wing asset. But it's unlikely to hover sufficiently near active combat areas, land vertically, or airdrop essential weapons during the conflict.
The weapons Beijing has nowadays can certainly deter any potential rival from contemplating a land invasion of China. This situation can be predicted as most unlikely due to the country's terrain and the sheer size. The possible attack on China more likely would be from the air, at least for quite some time until the possibility of land occupation becomes feasible, according to National Interest. (ANI)