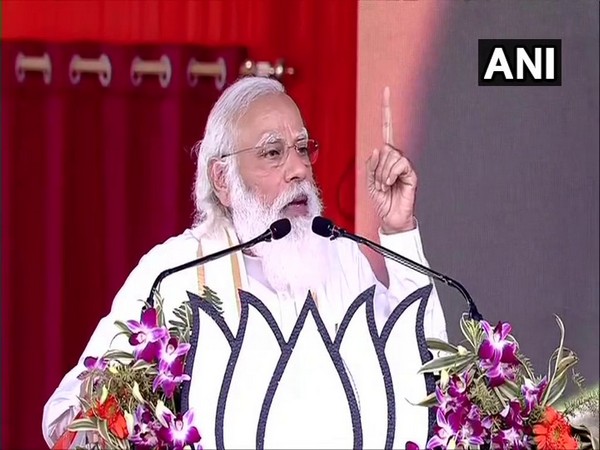 Hooghly (West Bengal) [India], February 22 (ANI): Hitting out at the Mamata Banerjee-led Trinamool Congress (TMC), Prime Minister Narendra Modi on Monday said that West Bengal will not be able to progress if syndicate rule and "tolabaji (extortion)" continue to persist.

Addressing a public rally here in Hooghly, Prime Minister Modi alleged that the monetary benefits of schemes in West Bengal never reached the poor as "TMC does not care the poor, needy and women of the state."
Asserting that the people of the state have made up their mind for "poriborton (change)", he said the BJP work for a 'Sonar Bangla' (golden West Bengal) that will strengthen the history and culture of Bengal.
"Development in West Bengal not possible as long as cut money culture, syndicate rule and "tolabaji" (extortion) persists. BJP government should be formed not just for political 'poribartan' (political change), but 'asol poribartan' (real change) in Bengal. Lotus will bring that 'asol poribartan' that youth aims for. Our youth is living with the hope of this 'Ashol Poriborton' (real transformation), and thus, we need to form the BJP government in Bengal," he said while urging the people to vote for the BJP in the upcoming Assembly polls in the state.
"The BJP government will bring changes in the industrial policies for development in the state. We will take quick decisions for swift development," he added.
The Prime Minister lashed out at the Mamata government for its failure to keep Vande Mataram Bhawan in a good state and called it an "injustice" to West Bengal's pride.
"I am told that Vande Mataram Bhawan, where Bankim Chandra Ji lived for 5 years, is in very bad condition. This is the same Bhawan where he brainstormed to write Vande Mataram, the poem which gave a new lease of life to the freedom struggle. Failure to keep the place of the creator of such 'amar gaan' in a good state is an injustice to West Bengal's pride and there is huge politics involved in this -- the politics which focuses on vote bank, not patriotism; appeasement, not Sabka Sath, Sabka Vikas," he said.
"This kind of politics stops people of Bengal from performing Durga puja and visarjan. People of Bengal will never forgive those who insult their culture for vote bank politics. BJP will work for a Sonar Bangla that will strengthen the history and culture of Bengal. We will build a Bengal where religion, faith, spirituality and ability will be respected. We will build a Bengal where there will be development will be for all and appeasement of none. A Bengal which will be 'tolabaji-mukt' and 'rojgar-yukt," he added.
Cornering Mamata for not providing benefits of central government schemes to the common people, the Prime Minister pointed out that 1-1.75 crore houses (in West Bengal), only 9 lakh have water pipeline.
"The way the state government works, no wonder how many more years it will take to deliver water to the poor. This shows that TMC doing injustice to 'Bengal Ki Beti'. Can they be forgiven? Centre transfers money directly into bank accounts of farmers and poor. But monetary benefits of schemes of the government does not reach the poor without the consent of all the 'tolabaaz' of TMC. This is why TMC leaders are becoming richer and normal families are becoming poorer," he said.
"The Central government has provided Rs 1,700 crores for relief work after Cyclone Amphan to the TMC government in Bengal. The state government has only spent Rs 609 crores. The leftover Rs 1,100 crores have been siphoned off by the TMC," he added. (ANI)