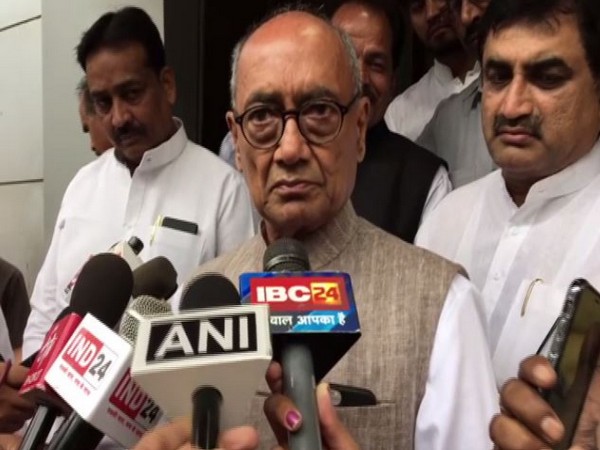 New Delhi [India], Oct 24 (ANI): On Thursday as results of Maharashtra and Haryana trickled in, senior Congress leader Digvijaya Singh reiterated his doubts over the current use of electronic voting machines (EVMs) in the polls.

"All those political parties opposed to EVM should demand that they want the Printed Ballot Paper from EVM in their hand which they can put in a Ballot Box not just a visual image," Singh's tweet read.
The Congress leader added that as per Election Commission rules the counting of votes of five ballot boxes in an assembly constituency should be conducted and recounting of all votes should be done in case of any discrepancy.
"During counting as decided by Supreme Court they can randomly choose 5 polling booths in an Assembly and Votes in the Ballot Box can be counted. If the numbers match the counting unit of EVM we have no objection, if they do not then all votes in the ballot box should be counted," Singh's second tweet read.
"So it would be a combination of EVM and Ballot Paper and then no one can ever doubt the verdict. CEC must consider this and it would finally and permanently close the controversy of EVM to everyone's satisfaction. It would also enhance the impartial Image of CEC," he added in a subsequent tweet.
While the Congress has done well in Haryana assembly elections, where it won 31 of the 90 seats, it has performed rather poorly in Maharashtra where it could win just 31 seats and has maintained a lead on 13 other seats taking its total count to 44 of the 288 seats.
In Digvijaya Singh's home state, the Congress won the Jhabua assembly by-polls where its candidate Kantilal Bhuria beat BJP's Bhanu Bhuria by a margin of over 27,000 votes. (ANI)