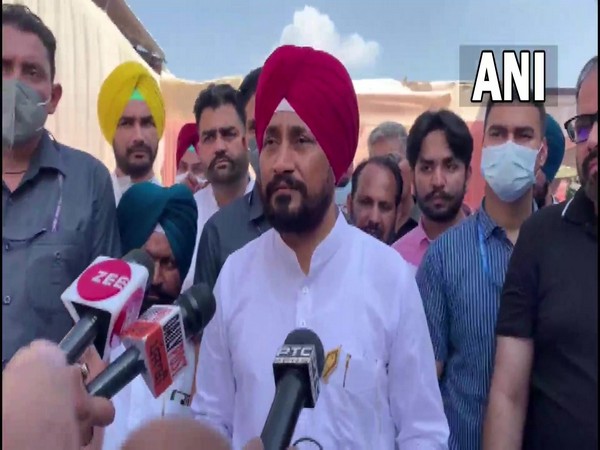 Chandigarh (Punjab) October 14 (ANI): Punjab Chief Minister Charanjit Singh Channi on Wednesday condemned the Centre's decision to extend the Border Security Force (BSF)'s jurisdiction over a wider area along the borders of three states and said that it is a "direct attack on federalism".

Channi requested the Union Home Minister Amit Shah to immediately roll back this irrational decision.
"I strongly condemn the GoI's unilateral decision to give additional powers to BSF within the 50 km belt running along the international borders, which is a direct attack on federalism. I urge the Union Home Minister @AmitShah to immediately roll back this irrational decision," tweeted Channi.
Punjab Home Minister Sukhjinder Singh Randhawa has termed the Centre's recent decision of allowing more jurisdiction to the Border Security Force (BSF) in border areas as an attempt to "weaken the spirit of federalism".
Channi's predecessor Captain Amarinder Singh who had to resign as Punjab chief minister amidst tensions within the Congress has however approved of the Centre's move.
"Our soldiers are being killed in Kashmir. We're seeing more and more weapons and drugs being pushed by Pakistan-backed terrorists into Punjab. BSF's enhanced presence and powers will only make us stronger. Let's not drag central armed forces into politics," Singh tweeted.
Former Punjab Congress President Sunil Jhakkar also took a dig at the chief minister when he put out a tweet stating that Channi had unwittingly managed to hand over half of Punjab to Central government.
"Be careful what you ask for! Has (Punjab CM) Charanjit Singh Channi unwittingly managed to hand over half of Punjab to Central govt. 25,000sq km (out of total 50,000sq km) has now been placed under BSF jurisdiction. Punjab Police stands castigated. Do we still want more autonomy from the States?"
In a move aimed at maintaining "zero tolerance" against terrorism and cross border crimes, the Centre has empowered the BSF to conduct searches, arrest suspects and make seizures up to an area of 50 km inside Indian territory from the International Border (IB) along the India-Pakistan and India-Bangladesh borders.
As per the fresh order, the BSF, which was only empowered to take action up to fifteen kilometres in the states of Punjab, West Bengal and Assam, has now been authorised to spread its jurisdiction up to 50 km without any hurdle or further permission either from central or state governments.
However, its jurisdiction has been cut short by 20 km in the five northeastern states-- Manipur, Mizoram, Tripura, Nagaland and Meghalaya-- where it had jurisdiction up to 80 km. Similarly in Gujarat, the BSF's jurisdiction has been curtailed from 80 to 50 km.
In Rajasthan, the BSF's area of jurisdiction will remain the same at 50 km. An officer of the rank corresponding to that of the lowest rank of member of the BSF is now empowered under the CrPC to exercise and discharge the powers and duties without an order from a Magistrate and without a warrant.
The officer is now empowered to arrest any person who has been concerned in any cognizable offence, or against whom a reasonable complaint has been made, or credible information has been received. A BSF officer has now been given the power to conduct a search of a place entered by a person sought to be arrested in its new area of jurisdiction. (ANI)