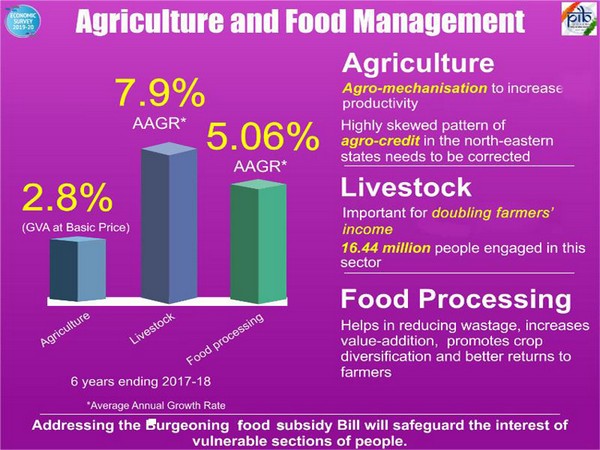 New Delhi [India], Jan 31 (ANI): Investment in social infrastructure is a pre-requisite for inclusive growth and employment and expenditure on social services by the Centre and States increased from 7.68 lakh crore in 2014-15 to 15.79 lakh crore in 2019-20 (Budget Estimate), says Economic Survey presented to Parliament on Thursday.

It says that as a proportion of Gross Domestic Product (GDP), the expenditure on social services has registered an increase of 1.5 percentage points during the period 2014-15 to 2019-20 from 6.2 to 7.7 per cent.
The survey emphasises government's focus on doubling farmers income by 2022 and lays stress on mechanization of agriculture, livestock and fisheries sector, food processing, financial inclusion, agricultural credit and crop insurance, micro-irrigation and buffer stock management.
It says expenditure on education, as a percentage of GDP increased from 2.8 per cent to 3.1 per cent between 2014-15 and 2019-20 (BE). Similarly, expenditure on health increased from 1.2 per cent to 1.6 per cent during the same period as a percentage of GDP, the pre-budget document notes.
India's rank in the Human Development Index (HDI) improved to 129 in 2018 from 130 in 2017, reaching a value of 0.647.
With 1.34 per cent average annual HDI growth, India is among the fastest-improving countries. Among its BRICS peers, India is ahead of China (0.95), South Africa (0.78), Russian Federation (0.69) and Brazil (0.59).
To sustain this momentum in human development and to further accelerate it, the role of the public sector in the delivery of social services is critical, observes the survey.
Considering India's demographic advantage of a large young population in the productive age group, improvements in social sectors like education and health leave a profound impact on the quality of life of the people and productivity of the economy.
The Government's interventions in the education sector aim to achieve the Sustainable Development Goal (SDG)-4 of inclusive and equitable quality education for all by 2030, the survey says.
"With this objective, Samagra Shiksha 2018-19 has been launched to envisage school education as a continuum from pre-school to senior secondary level. Other initiatives include expansion of Navodaya Vidyalaya Scheme, Pradhan Mantri Innovative Learning Program (DHRUV), Digital Infrastructure for Knowledge Sharing (DIKSHA) platform and e-content sites like e-pathshala," it says.
The Government has initiated the process of formulating a New Education Policy with a focus on quality education, innovation and research.
The Economic Survey recognizes high drop-out rates at various levels of schooling and lack of affordability in higher education as areas of concern.
Referring to health, the survey says that Ayushman Bharat, the world's biggest health care scheme to improve access to health and delivery of health services at a massive scale, has set up 28,005 Health and Wellness Centres as on January 14, 2020.
"To promote preventive healthcare, one-and-a-half-lakh Ayushman Bharat- Health and Wellness Centres are proposed to be set up by 2022," the survey notes.
The survey says that agriculture mechanization will help Indian farming transform into commercial farming from subsistence farming.
Emphasizing the need to enhance mechanization in agriculture, Economic Survey pointed out that in India, mechanization is 40 per cent compared to China (59.5 per cent) and Brazil (75 per cent).
Economic Survey states that fisheries remain an important source of food, nutrition, employment and income in India. It provides livelihood to about 16 million fishers and fish farmers in the country. Fisheries sector has registered an annual average growth rate of more than 7 per cent in recent years.
The survey stresses the need to promote food processing sector
It notes that the natural trajectory of the development process and owing to structural changes in the economic share of agriculture and allied sectors in Gross Value Added (GVA) of the country at current prices has declined from 18.2 per cent in 2014-15 to 16.5 per cent in 2019-2020. (ANI)