Economy is sound as 3 movies earned over Rs 120 crore in a day, says Ravi Shankar Prasad 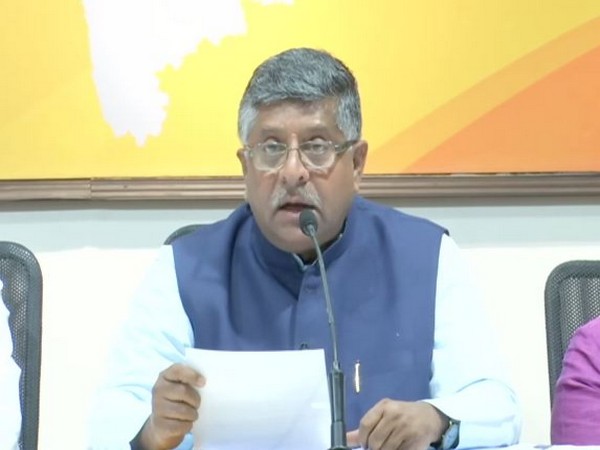 Mumbai (Maharashtra) [India], Oct 12 (ANI): Dismissing concerns about economic slowdown, Union Minister Ravi Shankar Prasad on Saturday cited the earnings of three movies on October 2, saying they collectively earned Rs 120 crore in a day and hence the economy of the country is "sound".

Addressing a press conference, Prasad said: "On October 2, three movies were released. Film trade analyst Komal Nahta had said that the day saw earning of over Rs 120 crore, a record by the three movies. The economy of the country is sound. That is why there is a return of Rs 120 crore in a day."
"I was the Information and Broadcasting Minister in the then Atal Bihari Vajpayee's government. I am fond of movies. There has been a huge business of movies," he added.
The economic growth slowed to a seven-year low to 5 per cent in April as compared to 8 per cent in June quarter a year ago, as per the government data.
The slowdown was largely due to a sharp dip in the manufacturing sector and agriculture output, the Union Ministry of Statistics and Programme Implementation had said in a statement.
The Union Minister termed the National Sample Survey Office (NSSO) report as "false".
"That report is false. I gave you 10 relevant data, not one is present in the report. We never said we will give government jobs to everyone. Few people tried to mislead in a planned fashion," said Prasad.
In May, the Centre had made public the NSSO's Periodic Labour Force Survey report that placed the unemployment rate at 6.1 per cent for the year 2017-18, the highest in 45 years.
The report placed the unemployment rate among men at 6.2 per cent and women at 5.7 per cent, combining both rural and urban areas and the overall rate at 6.1 per cent.
Prasad said that Maharashtra government led by Chief Minister Devendra Fadnavis completed his five-year term and stated that the people of the state respect their leaders.
"Fadnavis has successfully completed his term of five years. This clearly states that the people of the state respect their leader as the BJP has a culture of respecting the leader who heads the state. Fadnavis has a clean image. It is a big achievement," said the Union Minister.
Making a veiled reference to P Chidambaram, who served as the then Home Minister when the 26/11 attacks took place, Prasad said: "In 2008, there was an attack in Mumbai and both the Centre and the state governments at that time were so helpless. The Home Minister at that time said 'Sorry Mumbai' and he is in jail now."
"Today nobody has the guts to attack Mumbai or Maharashtra. They know if they carry out an attack, they will have to pay a very heavy cost," he said while reiterating the Centre's resolve of zero tolerance against terror. (ANI)