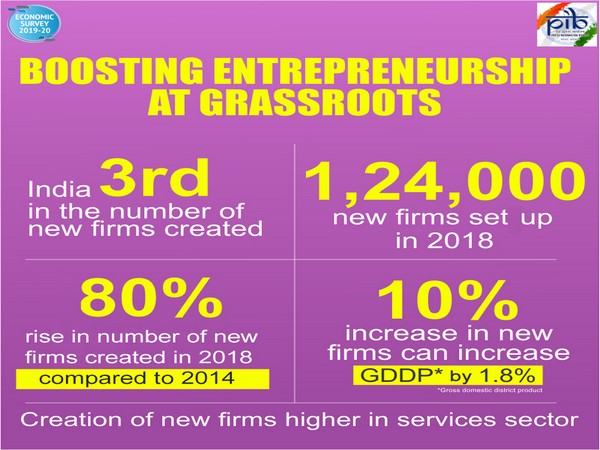 New Delhi [India], Jan 31 (ANI): The Economic Survey presented by Finance Minister Nirmala Sitharaman on Friday notes that the entrepreneurial activity in the manufacturing sector was highest in the regions of Gujarat, Meghalaya, Puducherry, Punjab and Rajasthan and the birth of new firms is very heterogeneous across Indian districts and sectors.

It says that India ranks third in the number of new firms created according to World Bank's Data on Entrepreneurship.
The same data shows that new firm creation has gone up dramatically in India since 2014.
"While the number of new firms in the formal sector grew at a cumulative annual growth rate of 3.8 per cent from 2006-2014, the growth rate from 2014 to 2018 has been 12.2 per cent. As a result, from about 70,000 new firms created in 2014, the number has grown by about 80 per cent to about 1,24,000 new firms in 2018," a Finance Ministry release said.
The survey notes that new firm creation in services is significantly higher than that in manufacturing, infrastructure or agriculture.
Entrepreneurial activity in the services sector is highest in Delhi, Mizoram, Uttar Pradesh, Kerala, Andaman and Nicobar islands and Haryana.
The survey observes that the birth of new firms was very heterogeneous across Indian districts and sectors.
"It is dispersed across India and is not restricted to just a few cities. The literacy and education in the district foster local entrepreneurship significantly. For instance, the eastern part of India has the lowest literacy rate of about 59.6 per cent according to the census of 2011. This is also the region in which new firm formation is the lowest. In fact, the impact of literacy on entrepreneurship is most pronounced when it is above 70 per cent," the survey says.
The survey points out that the level of local education and quality of physical infrastructure in the district influence new firm creation significantly.
The grassroots entrepreneurship is not just driven by necessity as a 10 per cent increase in registration of new firms in a district yields a 1.8 per cent increase in GDDP (Gross District Development Product).
Entrepreneurship at the bottom of the administrative pyramid- a district - a significant impact on wealth creation at the grassroots level.
This impact of entrepreneurial activity on GDDP is maximal for the manufacturing and services sectors.
The survey notes that despite being the 3rd largest ecosystem for entrepreneurship in the world, India appears to have lower rates of formal entrepreneurship on a per-capita basis when compared to other countries.
The Survey points out that entrepreneurial capabilities in the agriculture sector seem to be distributed evenly across most districts in India.
It notes that the entrepreneurial activity in the Manufacturing sector is highest in the regions of Gujarat, Meghalaya, Puducherry, Punjab and Rajasthan. Within Gujarat, the most entrepreneurially active districts in Manufacturing sector are Surendranagar, Rajkot, Bhavnagar and Surat. Establishments in these regions are focused on textiles, chemicals, metals, plastics, and pharmaceuticals manufacturing. (ANI)