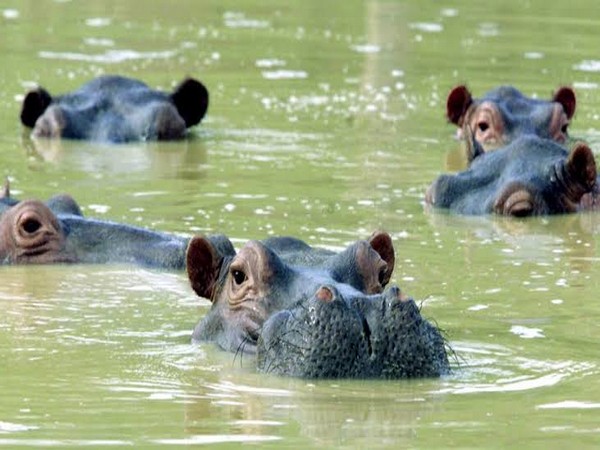 Bogota [Columbia], Feb 2 (ANI): The aquatic ecosystem of Columbia is being ravaged by the invasive hippo populations that are descendants of the animals that were owned by the feared drug kingpin Pablo Escobar.

Fox News cited the Cnet website, which reported that this finding was reached upon by a study that appeared in the journal Ecology.
This study by a group of researchers from the University of California, San Diego and the Universidad Pedagogica y Tecnologica de Colombia, revealed that the current hippo population of 80 individuals traces its origin to just four animals.
The water-dwelling mammal can tip the scales at nearly 3000 pounds and the huge quantities of excrement they produce strangulates the lake ecosystem by changing its chemistry and oxygen levels.
According to Cnet, hippo Waste promotes the growth of unwanted bacteria and algae often leading to uncontrolled algal blooms that put the health of humans and animals in jeopardy.
The first of the hippos were kept in captivity at Escobar's drug lair for the amusement of his children and they eventually went feral once he was killed by law enforcement in 1993.
The researchers expressed their concern that hippos are dangerous animals so it is extremely hard to catch or confront them.
For this reason, it is expected that their population is likely to multiply, and this would further exacerbate the ecological damage.
Lead author Jonathan Shurin, a biological sciences professor from UC San Diego warned by stating: "If you plot out their population growth, we show that it tends to go exponentially skyward...In the next couple of decades, there could be thousands of them. This study suggests that there is some urgency to deciding what to do about them. The question is: What should that be?" (ANI)