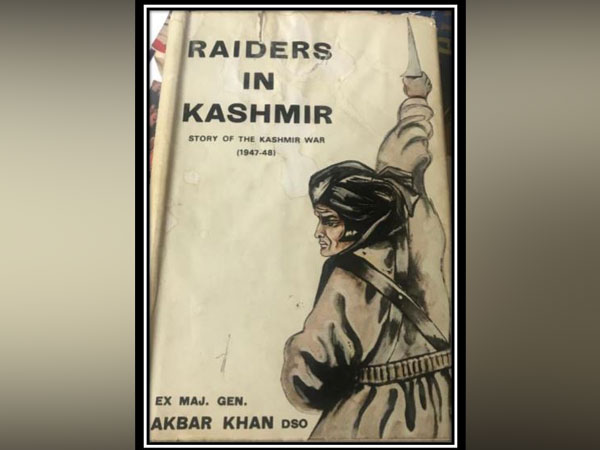 Islamabad [Pakistan], October 18 (ANI): A retired Army officer in Pakistan has exposed his country's role in initiating the 1947 conflict in Kashmir and its aggressive intentions to invade and occupy the whole of Kashmir.

In his book 'Raiders in Kashmir', retired Major General Akbar Khan admits to played a leading role in creating the 1947 conflict in Kashmir, according to the EU Chronicle.
Akbar Khan served on the Armed Forces Partition Sub-Committee which gave him unfettered access to knowledge and intelligence on the security of Kashmir.
At the beginning of September 1947, Akbar Khan as the then Director of Weapons and Equipment (DW&E) stationed at the General Headquarters of the Pakistan Army, was asked to prepare a plan to take over Kashmir.
In his position as Director, he was fully aware of the stocks of weapons and ammunition held by the Pakistani army and those needed for an assault on Kashmir.
In order to execute the aggressive strategy he acquired weapons from Italy, and covertly supplied them to Pakistan's agents in Kashmir.
The aim of the Pakistani military operation was to invade, plunder and inflict violence on the people of Kashmir, to intimidate and oppress in order to occupy, depose Maharaja Hari Singh of Jammu and Kashmir and take control of the princely state.
In an operation was code-named 'Gulmarg', after the region's hill-station, and with the full understanding of Kashmir's resources and security capabilities, Pakistan's military, under the direction of its political leadership, formulated an offensive to attack the Maharaja's forces by surprise and invade Kashmir on October, 22 1947 - just two months after Partition.
The invasion was sparked because Pakistan had not expected the Maharaja of Kashmir, Hari Singh, to accede Kashmir to India.
Pakistan had attempted to threaten the Maharaja by pressurising him and insisting that Kashmir accede to Pakistan - the latter had made it clear that Kashmir would be annexed by force if necessary. True to its threats, following Maharaja Hari Singh's request to India for support and protection against its aggressive neighbour, Pakistan invaded Kashmir, EU Chronicle article stated.
Akbar Khan has testified to the fact that the regular Pakistan army, along with tribal forces it had influenced who was acting on behalf of Pakistan, began their incursions in Kashmir and continued the combat in an attempt to annex Kashmir.
The Pakistani forces were ruthless and barbaric - raping women, killing innocent Kashmiri civilians including children and creating anarchy to accomplish their objective. In the town of Baramula alone on October 26 1947, of 14000 Kashmiri Hindus, Muslims and Sikhs, only 3000 survived.
Pakistani forces indulged in the ethnic cleansing of local Kashmiris, something rarely highlighted in historical recounts of the events. (ANI)