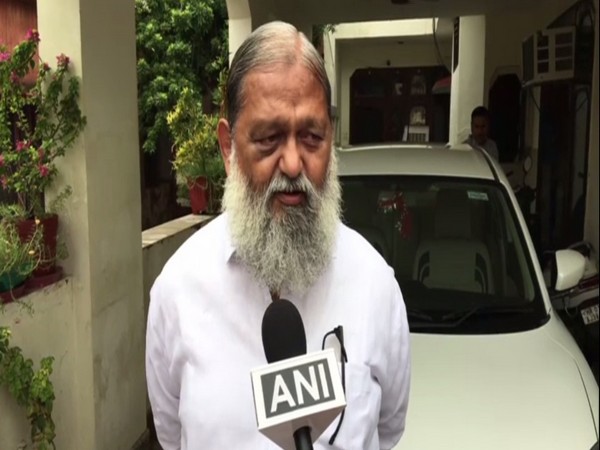 Chandigarh (Haryana) [India], Sept 13 (ANI): The Haryana government has decided to make Ayushman Bharat card for the families having an annual income of upto Rs 1.80 lakh under the centre's flagship health scheme "Ayushman Bharat Yojana".
Haryana Health Minister Anil Vij took to Twitter apprising about the BJP-led state government's decision to bear the full cost that would be incurred in covering such families under the scheme.

"The Haryana government has decided to make the Ayushman Bharat card for the families having annual income upto Rs. 1.80 lakh. The families covered under the scheme can avail free of cost treatment worth Rs 5 lakh per annum. The Haryana government will bear the entire cost for this," tweeted Anil Vij.
"People have asked how those who have an annual income of upto Rs 1.80 lakh can get Ayushman Bharat card? It can be made at any "Atal Sewa Kendra". If your income is less than Rs 1.80 lakh then the card will be delivered at your doorstep," he said in a subsequent tweet.
Ayushman Bharat gives benefit cover of Rs 5 lakh per family per year. Benefits of the scheme are portable across the country and a beneficiary covered under the scheme is allowed to take cashless benefits from any public/private empanelled hospitals across the country.
Recently, Union Health Minister Dr Harsh Vardhan said that September 23 will be celebrated as Ayushman Bharat Diwas. The fortnight of 15th - 30th September will be marked as the "Ayushman Bharat Pakhwara" where several activities will be carried out in the States to generate awareness around the scheme and celebrate this gift of health to the nation.
In the past one year, Ayushman Bharat has given relief to 45 lakhs patients who got admitted in hospitals to avail medical services, 10 crore e-cards have been issued and more than 18,000 hospitals have been impanelled across the country. (ANI)