Farmers from UP villages to fast, send messages to PM every day from March 1, says farmer leader 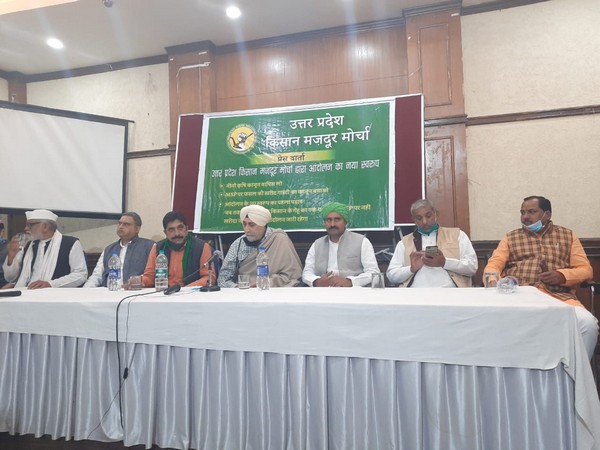 New Delhi [India], February 24 (ANI): The Uttar Pradesh Kisan Mazdoor Morcha on Tuesday said it will launch a village-level agitation across the state from March 1 seeking withdrawal of the Centre's three farm laws and guarantee to purchase at the minimum support price (MSP).

VM Singh, leader of Rashtriya Kisan Mazdoor Sanghatan (RKMS) , which has joined 21 other farmer outfits to form the Uttar Pradesh Kisan Mazdoor Morcha (UPKMM). said: "This new movement will start from March 1, where five people from each village will observe fast every day and record messages to be sent to Prime Minister Narendra Modi every two minutes. If even 500 villages are covered in one district, then 5000 men will let the prime minister know through the website the voices of the farmers. This will be done to unite the villages."
UPKMM was constituted with 22 farmer outfits on February 21 after coordinated meetings with about two dozen farmers 'organizations in Uttar Pradesh.
Singh claimed that the RKMS had never disassociated with the farmers agitating against the three farm laws at the different borders of the national capital since November last year
"We did not leave the movement. We were against the manner in which the protest turned violent. I had also said that we will come back in the form of a new movement and today after one month we have returned. I believe that if this movement reaches the people within the village, then the farmers will get benefitted," Singh said.
At the Republic Day tractor rally, farmers breached barricades and clashed with police at several places in the national capital, after which the RKMS had announced that they were not going to be associated with the farmers' agitation.
The RKMS leader further said that the village level agitation is also aimed at sending a message to those who claimed that the agitation is not farmer-driven but hijacked by vested interests.
"The ministers say that there are no farmers in the protest but when the farmers will send their message from their villages, then will understand that the protest is genuine and that the rights of the farmers should be guaranteed, Singh said.
The RKMS leader further extended solidarity to those farmers who were continuing their protest at the borders of Delhi.
"We wish luck to those who are sitting at the Ghazipur, Singhu, and Tikri border. We are doing our work but we will be different in the form of agitation," Singh said.
While speaking to ANI, Singh further said, "MSP is our main right and we should get the guaranteed purchase as per the MSP. If someone buys less than that, then it will be considered an offence."
Farmers have been protesting at the different borders of the national capital since November last year, against the three newly enacted farm laws - Farmers' Produce Trade and Commerce (Promotion and Facilitation) Act, 2020; the Farmers Empowerment and Protection) Agreement on Price Assurance and farm Services Act 2020 and the Essential Commodities (Amendment) Act, 2020. (ANI)