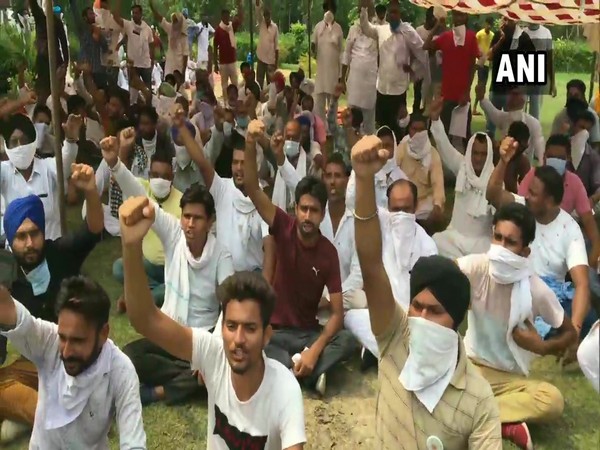 "Our sit-in protest will go on till September 19. If the government doesn't listen to us even after that, then we'll block roads across the state on September 20," said Malkit Singh, District Head, Bharatiya Kisan Union.
Talking to ANI, Ambala City sub-division magistrate (SDM) Sachin Gupta said that the administration has tried to talk to the protesters to move the protest at a more spacious location in view of the COVID-19 pandemic.
"If they will not listen and not follow COVID-19 protocol. Then we'll have to take the necessary actions," Gupta said.
Haryana Police said that the farmers have agreed to follow all COVID-19 norms while staging the protest.
"We have asked the farmers to not hinder the daily proceedings at DC office and follow COVID-19 norms, they have agreed at it," said Sultan Singh, deputy superintendent of police (DSP), Ambala.
Earlier on September 13, farmers took out a protest rally over the introduction of three ordinances in the agriculture sector, in Haryana's Kurukshetra.
"These ordinances will create a system under which mandis will collapse and MSP scheme will be repealed," said Bharatiya Kisan Union state chief Gurnam Singh at the protest rally.
On September 10, farmers blocked National Highway 44 near Kurukshetra to lodge a protest against the three recent agriculture ordinances passed by the Union Cabinet. (ANI)