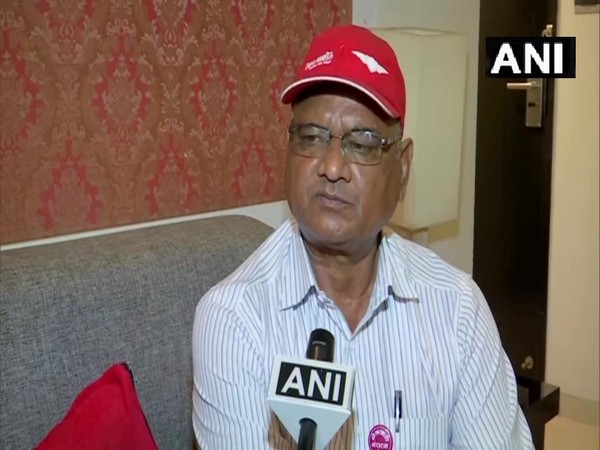 Pune (Maharashtra) [India], January 13 (ANI): Included in the four-member committee set-up by the Supreme Court to hold talks with the farmers agitating over the new farm laws, Anil Ghanwat on Tuesday said that "protesting farmers will get justice."

The Supreme Court on January 12 stayed the implementation of three farm laws and tasked the committee of experts to listen to grievances of the farmers on the farm laws and the views of the government and submit its report to the court within two months.
Anil Ghanwat, president of the Shetkari Sanghatana, a Maharashtra-based farmer organisation told ANI, "This movement should stop somewhere and a law should be made in the interest of farmers. First we need to listen to farmers, if they had some misconception about Minimum Support Price (MSP) and Agricultural Produce Market Committee (APMC), we will clear it, they need to be assured that whatever is happening is in their interest."
"Several farmer leaders and unions want freedom from the monopoly of APMC, this need to be stopped and farmers should be given the freedom to sell their crop. This has been a demand for the last 40 years. Farmers, who want MSP should get it and those who want freedom from it should also have an option."
Meanwhile, the protesting farmer leaders made it clear that they will not accept the decision of the court to form a committee. According to farmer leaders' the central government is bringing this committee through Supreme Court. They claimed that all the members in this committee have been pro-government and these members have been justifying the laws.
Ghanwat said that it was completely wrong on the part of farmers to believe that.
"It is a total misconception. Ashok Gulati is not a political leader or even part of any group, he is an agricultural economist. I have been neutral on this, I have never worked for any political party but only in favour of farmers, and whatever happens in the coming days, we will try our best to get the issue resolved in favour of all farmers of the nation, not just for farmers of Maharashtra or Punjab."
Apart from Ghanwat, the other members of the committee appointed by the apex court include Bhupinder Singh Mann, President of Bharatiya Kisan Union's Mann faction, Pramod Kumar Joshi Director of International Food Policy Research Institute and agricultural economist Ashok Gulati.
The panel, Ghanwat said could not start its work until it got guidelines from the Supreme Court. "As soon as it arrives, we will meet all the farmer leaders and get their opinion of what they need and how it can be done," he added.
"I will set aside my personal views, agitating farmer leaders should work with the committee and express their views," Ghanwat said.
Farmers have been protesting at the different borders of the national capital since November last year, against the three newly enacted farm laws - Farmers' Produce Trade and Commerce (Promotion and Facilitation) Act, 2020; the Farmers Empowerment and Protection) Agreement on Price Assurance and farm Services Act 2020 and the Essential Commodities (Amendment) Act, 2020. (ANI)