GDP growth to range between 6 to 6.5 pc in FY21: Economic Survey 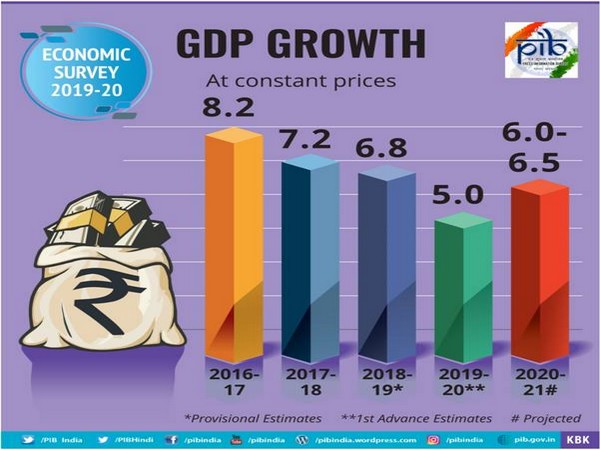 New Delhi [India], Jan 31 (ANI): India's gross domestic product (GDP) is expected to rebound and grow at a rate of 6 to 6.5 per cent in the next financial year 2020-21, according to the Economic Survey laid in Parliament on Friday.

Weak global growth impacting the country and investment slowdown due to crisis in the domestic financial sector had led to the government to estimate GDP expansion at 5 per cent for the current financial year ending on March 31.
The Survey has asked the government to use its strong mandate to deliver expeditiously on reforms, which will enable the economy to strongly rebound in 2020-21.
Finance Minister Nirmala Sitharaman tabled the Economic Survey 2019-20 in Parliament, which said the deceleration in GDP growth can be understood within the framework of a slowing cycle of growth.
"The financial sector has acted as a drag on the real sector."
It said the uptick in second half of 2019-20 will be mainly due to an upbeat secondary market, higher FDI flows, build-up of demand pressure, positive outlook for rural consumption, rebound of industrial activity, steady improvement in manufacturing, growth in merchandise exports, higher build-up of foreign exchange reserves and positive growth rate of GST revenue collection.
The year 2019 was a difficult year for the global economy with world output growth estimated to grow at its slowest pace of 2.9 per cent since the global financial crisis of 2009, declining from a subdued 3.6 per cent in 2018 and 3.8 per cent in 2017.
Uncertainties, although declining, are still elevated due to protectionist tendencies of China and the United States besides and rising US-Iran geopolitical tensions.
Amid a weak environment for global manufacturing, trade and demand, the Indian economy slowed down with GDP growth moderating to 4.8 per cent in the first half of 2019-20, lower than 6.2 per cent in the second half of 2018-19.
A sharp decline in real fixed investment induced by a sluggish growth of real consumption has weighed down GDP growth from the second half of 2018-19 to the first half of 2019-20.
Real consumption growth, however, has recovered in Q2 of 2019-20, cushioned by significant growth in government final consumption.
On the supply side, agricultural growth though weak is moderately higher in the first half of 2019-20 than in the second half of 2018-19.
Headline inflation rose from 3.3 per cent in the first half of 2019-20 to 7.4 per cent in December 2019 on the back of a temporary increase in food inflation, which is expected to decline by year-end.
Rise in CPI-core and WPI inflation in December 2019 suggests the building of demand pressure, said the survey.
In an attempt to boost demand, 2019-20 has witnessed significant easing of monetary policy with the repo rate having been cut by RBI by 110 basis points.
Having duly recognised the financial stresses built up in the economy, the government has taken significant steps this year towards speeding up the insolvency resolution process under Insolvency and Bankruptcy Code (IBC) and easing of credit, particularly for the stressed real estate and non-banking financial companies (NBFCs) sectors.
At the same time, the impact of critical measures taken to boost investment, particularly under the National Infrastructure Pipeline, present green shoots for growth in H2 of 2019-20 and 2020-21.
Given India's record of growth with macroeconomic stability over the last five years (annual average growth rate of 7.5 per cent), the economy is poised for a rebound towards the five trillion dollar goal by 2024-25.
The net FDI and net foreign portfolio investment (FPI) in the first eight months of 2019-20 stood at 24.4 billion dollars and 12.6 billion dollars respectively, more than the inflows received in the corresponding period 2018-19.
(ANI)