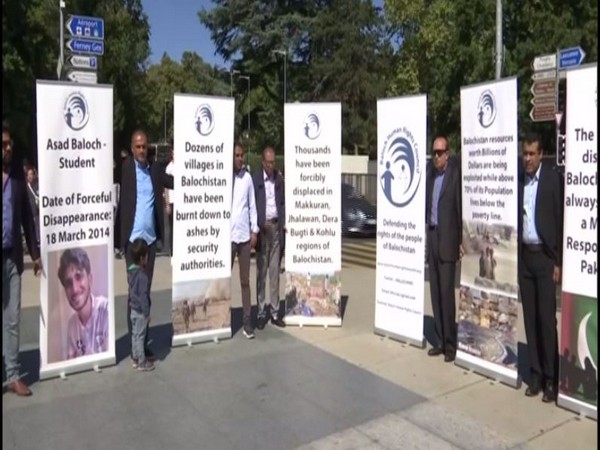 Geneva [Switzerland], Sept 13 (ANI): Baloch and Sindhi activists on Friday gathered at Broken Chair in front of the United Nations office in Geneva to express their anger towards the atrocities committed by Pakistan Army in Balochistan.

The demonstrators also condemned China's presence in Balochistan by raising the slogan "China: New Imperialist power in Balochistan".
The protest was organised by Baloch Human Rights Council (BHRC) and held during the 42nd session of the UN Human Rights Council with an aim to bring to light the atrocities carried out by the Pakistan Army.
"We are protesting against the brutalities of the fascist Pakistani Army which is killing our innocent people - lawyers, students, journalists. This artificial state is a curse on the people of Balochistan," said Hassan Dost, the Vice President of Baloch National movement (UK Chapter).
For long, Pakistan's establishment has been criticised over its practice of enforced disappearances and extrajudicial killings by international bodies and local human rights organisations that dare to speak out on the issue.
According to the Commission of Inquiry on Enforced Disappearances, an entity established by the Pakistani government, about 5,000 cases of enforced disappearances have been registered since 2014. Most of them are still unresolved.

Independent local and international human rights organisations put the numbers much higher. Around 20,000 have reportedly been abducted only from Balochistan, out of which more than 2,500 have turned up dead as bullet-riddled dead bodies, bearing signs of extreme torture.

Before being elected as Prime Minister, Imran Khan had admitted in multiple interviews about the involvement of Pakistan's intelligence agencies in enforced disappearances and extrajudicial killings and vowed to resign if he was unable to put an end to the practice, holding those involved responsible. (ANI)