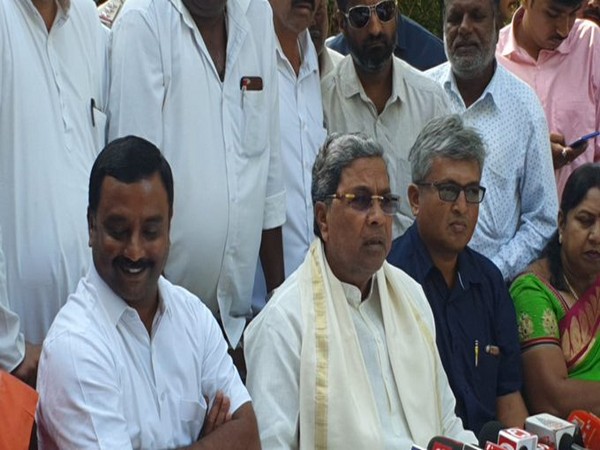 Bengaluru (Karnataka) [India], Jan 31 (ANI): Congress leader Siddarmaiah on Friday claimed that "a goon from Sangh family" fired at the silent protestors in Jamia area of the national capital yesterday.

"Sangh Parivar killed Gandhiji for his principles of secularism and universal brotherhood. Now from the same Sangh Parivar, a goonda has fired on the silent protestors in Jamia Millia University," said Siddarmaiah during a press conference here.
Alleging that the Center is not maintaining law and order in the country and is "suppressing the voice of protestors against the amended Citizenship Act", he asked: "Why is BJP so scared of harmony?"
In Jamia, a person brandished a gun in the presence of heavy police force deployment and fired towards the marching students on Thursday. One of the students sustained injuries on his left hand during the firing.
After the incident, the police said the DCP South-East also reached the hospital in no time to ensure that proper medical treatment was extended to the injured, who has been identified as Shadaab Farooq, a student of Jamia Millia Islamia.
The Delhi Police had said that 'no permission' was granted to students to carry out a march, however, sufficient police arrangements were made for the same.
"A case under Section 307 of Indian Penal Code and 25/27 of Arms Act has been registered at Police Station in New Friends Colony," said the police.
Delhi Police Crime Branch will produce the Jamia area firing accused before the Juvenile Justice Board later today.
(ANI)