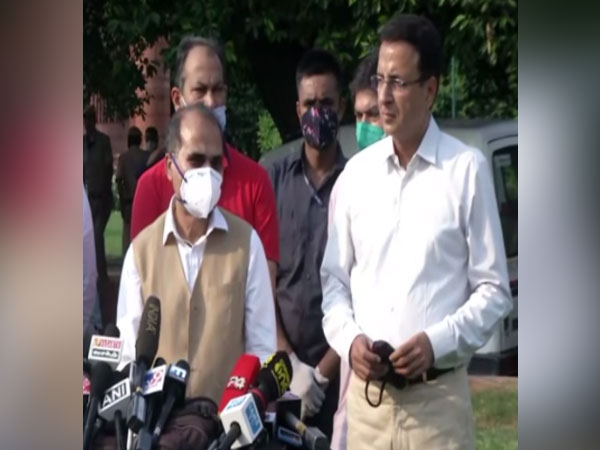 New Delhi [India], September 15 (ANI): Leader of Opposition in Lok Sabha Adhir Ranjan Chowdhury on Tuesday said that Prime Minister Narendra Modi's absence from Parliament when a resolution was passed on the India-China situation shows that the government is afraid of discussion on the impending situation.

"Today Defence Minister Rajnath Singh presented his statement on the India-China situation in Ladakh. For the Congress Party, the country is the most important. In 1962 when India-China war took place, then the opposition leader Atal Bihari Vajpayee asked about the situation on the border. The then Prime Minister Jawaharlal Nehru agreed to the demand and there was a discussion for two days in the parliament on the war and border situation," Chowdhury told reporters here.
Congress MPs staged a walkout from the Lok Sabha after the government declined Opposition's demand to hold a discussion on India-China border issue.
"This government did not allow us to speak in parliament. They are afraid that if Congress asks anything then they will not have any answers. When a resolution was passed on the India-China situation then PM Modi was absent. He is afraid of conducting a discussion in the parliament, " he said adding that the party had to walk out to express their message to the country.
Congress spokesperson Randeep Singh Surjewala also said that the government should give an answer on whether China has encroached Indian territory at specific positions across the border.
"The entire country is proud of the armed forces and that is why we are talking here. But the Prime Minister is absent in the parliament when a resolution is being passed on the border situation," he said.
"Our questions are very straight forward. Has China occupied Indian territory? Secondly, have the Chinese encroached on Depsang plains, Gogra, Pangong-Tso lake till Finger 8, Y-junction in Bhutan, Lipulekh Pass in Uttarakhand and in Arunachal Pradesh. The government should answer these questions," he added.
He further said that the Prime Minister should apologise to the nation if the answers to the above questions are affirmative as he had said on June 19, 2020, that the Chinese have not entered the Indian territory.
Meanwhile, Congress leader Shashi Tharoor tweeted: "The Defence Minister excoriated China for transgressing the LAC, could the Govt explain why the Prime Minister had issued an extraordinary statement claiming that China had not entered our territory? Presumably, the Government has changed the PM's stand?"
"Another question: since the Defence Minister says that both countries have now agreed in talks to respect the LAC, but separately says the two countries have differing perceptions of where LAC lies, isn't that a recipe for another clash? Shouldn't we just insist on status quo ante?" he added.
Earlier today, Defence Minister Rajnath Singh said that China began disrupting the normal and traditional patrolling pattern of Indian troops in the Galwan Valley in May this year causing face-off conditions between the two Armies.
"From April, the number of Chinese armies and their armaments on the border of Eastern Ladakh was observed. Early in the month of May, China began disrupting the normal, traditional patrolling pattern of our troops in the Galwan Valley region, causing face-off conditions. Ground commander level meetings were also being held," Singh said while speaking in Lok Sabha today.
The two countries have been engaged in a standoff since April-May and the Chinese have refused to vacate locations in the Finger area and other friction points in the Eastern Ladakh area.
Multiple rounds of talks have also failed to yield any significant result in defusing the tensions and now the Indian side has prepared itself for a long term deployment in the high mountainous region. (ANI)