Govt has always treated us as second class citizens: Bank employees on strike in Hyderabad 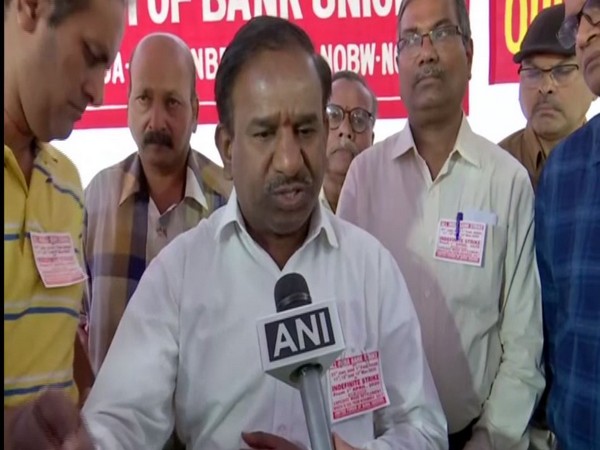 The strike coincides with the Budget Session of the Parliament, which commenced today. Union Finance Minister Nirmala Sitharaman will present her second Union Budget on Saturday.
The protesters said the government has always treated them as second class citizens.
"The government has always treated the bankers as second class citizens, with regard to employment, wages, pension and other aspects," Sukaiaah, General Secretary SBI Officers' Association told ANI.
"Today the economic status of this country is because of the banking industry. With regard to demonetisation, we made it successful. Both the Prime Minister and Finance Minister said these are the financial soldiers. They applaud us, appreciate us but when it comes to the wages and other demands they say no," he added.
SBI Bank Manager Kalpana Madhav said they have been fighting for two years for increment in basic pension.
"We are fighting for two years, primarily for an increase in the basic pension, it is very low. We are seeking the merger of special pay with basic pay. The second demand is about five-day banking, most of the officers are working late, till 8 pm or even longer."
Banks will also hold a strike on March 11, 12 and 13. Also, an indefinite strike will be held from April 1.
Some of the demands of the protestors are merger of special allowance with basic pay, updation of pension, improvement in the family pension system, five-day banking, allocation of staff welfare fund based on operating profits and exemption from income tax on retiral benefits without a ceiling. (ANI)