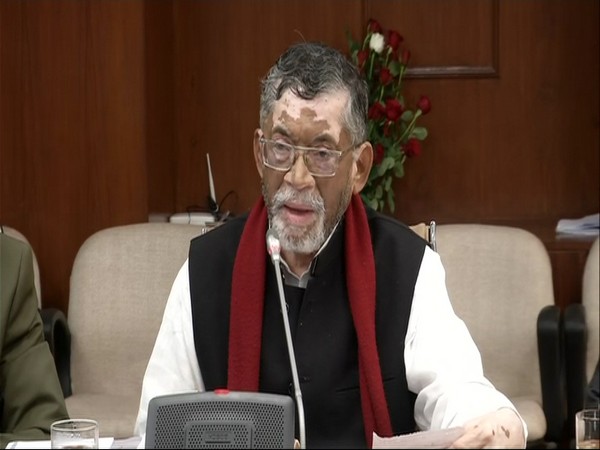 New Delhi [India], September 16 (ANI): Minister of State for Labour and Employment Santosh Kumar Gangwar said on Wednesday that "a number of unprecedented steps have been taken by the Union Government for labour welfare and employment including for migrant workers across India during COVID-19 pandemic."

"Labour is in the concurrent list and therefore, both State and Central Governments can legislate on the issues. Further, most of the Central Labour Acts including the Migrant Labour Act is being implemented exclusively by the State Government," said Gangwar as per a press statement from the Ministry of Labour and Employment.
As per the provisions of the Migrant Labour Act, the registration of the migrant workers is to be done by the respective State Governments and the data has to be maintained by the State Governments. However, in the unprecedented scenario of COVID-19, Ministry of Labour & Employment took the initiatives to collect the data of migrant workers who are going to their Home States during lockdown, it said.
"On the basis of information collected from various State Governments, around one crore migrant workers have gone back to their source State during COVID-19," the Ministry said.
Labour Minister further added that various initiatives taken for the welfare of Migrant Workers during the lockdown.
It said, immediately after the lockdown, directions were sent from Ministry of Labour & Employment to all the State Governments/UTs instructing them to provide financial assistance to construction workers from Building & Other Construction Workers' Cess Fund. It is estimated that the highest proportion of migrant workers are construction workers.
Till date, about two crore migrant workers have been provided Rs 5000.00 crores directly in their bank accounts from Building & Other Construction Workers' Cess Fund being maintained by various States, it said.
"In order to resolve the grievances of migrant workers during lockdown, Ministry of Labour & Employment had set up 20 Control Rooms all over the country. During lockdown, more than 15000 complaints of the workers were resolved through these Control Rooms and due to the intervention of Ministry of Labour & Employment more than two lakh workers were paid their due wages amounting to about Rs 295 crores," the press statement read.
After the lockdown, Pradhan Mantri Garib Kalyan Yojana with a financial package of Rs. 1.7 lakh crore was launched to help poor, needy and unorganised sector workers of the country. Under this package, 80.00 crore people have been provided 5 Kg. Wheat/Rice and 1 Kg. pulses. Free of cost food grains will now be provided upto November, 2020 to all the beneficiaries.
Aim of the Government is to ensure that no one is without food during this pandemic and challenging time, the Ministry said adding per day wages under MGNAREGA have been enhanced from Rs 182 to Rs 202.
Government has also announced the measures to strengthen Infrastructure Logistics, Capacity Building, Governance and Administrative Reforms for Agriculture, Fisheries and Food Processing Sectors.
Gangwar further informed that Government of India has launched PM SVANidhi Scheme to facilitate collateral-free working capital loan upto Rs 10,000 of one-year tenure, to approximately, 50 lakh street vendors, to resume their businesses.
In order to facilitate the employment of migrant workers who have gone back to their Home State, Pradhan Mantri Garib Kalyan Rojgar Abhiyan has been initiated in 116 districts in Mission Mode. Under this campaign, rural infrastructure would be built with the involvement of these migrant workers and about Rs. 50,000 crores would be spent for this purpose.
In a similar manner, many projects involving migrant workers have been initiated for the building of roads, Highways etc. by the Transport Ministry in order to facilitate the employment of migrant workers.
Twenty lakh crore financial package under Aatm Nirbhar Bharat has been launched specifically to create employment opportunities, for migrant workers, workers of the unorganized sector, strengthening of MSME Sector and promoting the rural economy. It includes a plethora of initiatives for all these sectors.
In order to provide minimum financial assistance to the workers through their EPF Account, Ministry of Labour & Employment under Pradhan Mantri Garib Kalyan Yojana has permitted all the EPF members to withdraw 75 per cent of their total provident fund deposited in their EPF Account. Till date, about Rs 39,000 crore have been withdrawn by the member of EPFO.
In order to facilitate migrant workers who are returning back to the Destination State for work, Ministry of Labour & Employment has issued Advisory Guidelines for all the State Governments/UTs on July 27, 2020.
Under these guidelines, States/UTs have been directed to nominate a State Level Nodal Officer to coordinate the implementation of various measures for the welfare of migrant workers who are coming back for employment.
Further, the State of Origin and Destination State will also coordinate for screening and testing of migrant workers as per the protocol devised by the Ministry of Health & Family Welfare. States have also been directed to prepare a proper database of migrant workers for their easy identification and welfare measures among them. This data would also facilitate in enrolling them to various Social Security Schemes of Government of India, the press statement added. (ANI)