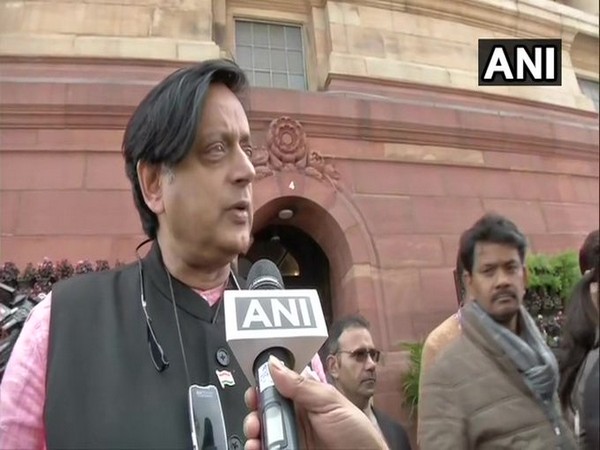 New Delhi [India], Jan 31 (ANI): Condemning the Okhla firing incident in which a student of Jamia Millia Islamia University sustained injuries, Congress MP Shashi Tharoor on Friday said the government is also responsible for creating a climate of hatred in which people feel that they are empowered to fire guns at peaceful protesters.

"This government is also responsible for creating a climate of hatred in which people feel that they are empowered to fire guns at peaceful protesters. It is really shocking and very disappointing. Certainly, the police should take action," Tharoor told ANI.
A man fired at a peaceful protest march against CAA in Jamia Nagar on Thursday in which a student, Shadab Farooq was injured. The shooter had earlier said in a social media post that he was giving "azadi" to the anti-CAA protesters.
Commenting on the President's speech at the joint sitting of both Houses of Parliament, Tharoor said, "We cannot blame the President because he reads what the government gives him to read. It was a speech that was largely devoid of substance. They have made the same old promises and claims which are divorced from reality."
He said that the Presidential address was replete with "empty, hollow statements one after the other" and made for a "very disappointing speech".
When asked about the Congress leaders wearing black bands, the leader said they wanted to showcase their dissociation with what was going on.
"We sat together in the middle of the Central Hall. We were highlighting our dissociation with this by putting on black bands on our arms. No Congress MP did any kind of demonstration. It was Trinamool Congress members who stood up with a placard and I support them for what they did."
The Trinamool Congress MPs protested against the contentious Citizenship Amendment Act (CAA) and National Population Register (NPR) in the Central Hall of Parliament. (ANI)