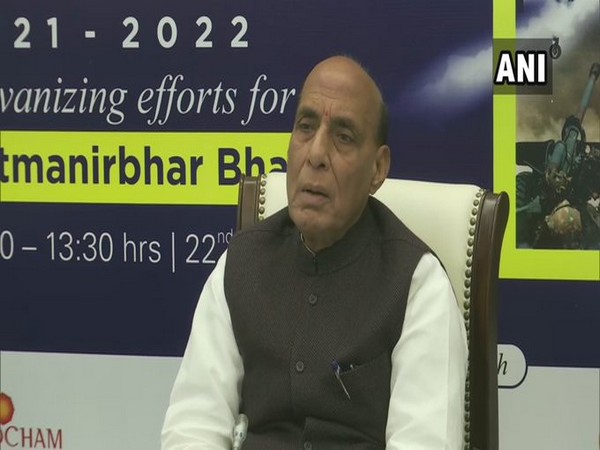 New Delhi [India], February 22 (ANI): Defence Minister Rajnath Singh on Monday said that the Centre will make efforts to complete the pending defence acquisitions within two years and to promote private participation in the defence sector.

Addressing a Webinar on 'Budget Announcements 2021-22', Singh said," Government of India has brought many reforms in last 6 years. There is a clear focus of the government on 'Ease of Doing Business' to encourage foreign Original Equipment Manufacturer (OEMs), to set up manufacturing units in India, develop joint ventures and promote private participation in the defence sector."
"Ministry is also working on bringing down the delays in timelines of capital acquisition. We will make efforts to complete the defence acquisition within 2 years, instead of the existing 3-4 years being taken on the average," Defence Minister added.
Over the implementation of Union Budget provisions in the Defence Sector, Rajnath Singh said, "Ministry of Defence aims to achieve a turnover of Rs 1,75,000 Crore (USD 25 billion) including export of Rs 35,000 Crores (US$ 5 Bn) in aerospace and defence goods and services by the year 2024."
The Union Budget for the year 2021-2022, stands out as a unique initiative of our government, the Defence Minister said and added that "It brings a healthy mix of promise, potential and progress. Its forward-looking agenda provides support for the defence and security of the country."
He further said that the pandemic was a severe setback to economic growth in the general and the industrial sector in particular. "The impact was felt more by MSME's, given the challenges of disruption in supply chains and liquidity," Rajnath Singh said.
"To widen the investment base, the Government of India has enhanced FDI in Defence Sector up to 74 per cent under Automatic Route and 100 per cent under Government route. This would further act as a catalyst for foreign players to invest in India," Singh said.
"Due to these reforms, the FDI in India in the Defence sector has jumped by more than 200 per cent. Rs. 2,871 Crore worth FDI has been invested in the defence sector in last 6 years," he added.
Union Budget for the Financial Year 2021-22 on February 01 has given a push to defence modernisation by increasing defence capital outlay by 18.75 per cent, according to an official release.
Defence allocation in the budget has been increased to Rs 4,78,195.62 crore for the Financial Year 2021-22. Excluding Defence Pension, the total allocations for Defence Services and other organisations/Departments under the Ministry of Defence for the FY 2021-22 is Rs 3,62,345.62 crore which is an increase of Rs 24,792.62 crore over the Current FY 2020-21.
The allocation under Capital of Rs 1,35,060.72 crore for FY 2021-22 represents an increase of 18.75 per cent over FY 2020-21 and 30.62 per cent over FY 2019-20. This is the highest ever increase in capital outlay of Defence in the last 15 years. (ANI)