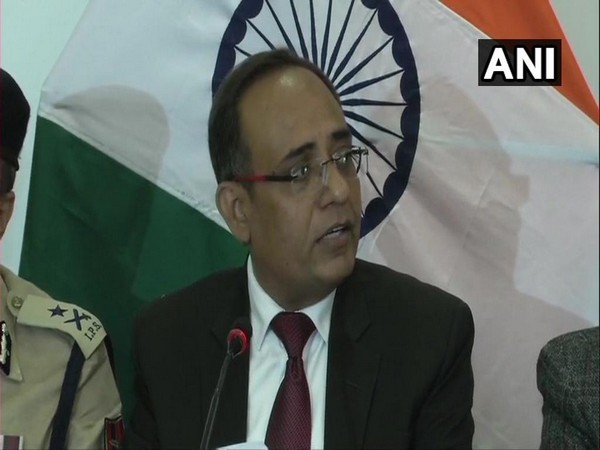 Srinagar (Jammu and Kashmir) [India], Oct 12 (ANI): The government on Saturday urged all stakeholders in Kashmir to go about their usual business without being deterred by threats of terrorists and separatists in the Valley.

"The government urges businessmen, industrialists, traders, transporters, shopkeepers, hoteliers and contractors not to be frightened by the threats of terrorists and separatists and go about their normal activities. The government is firm in its resolve that the attempts of these disruptive elements will be foiled," Rohit Kansal, Principal Secretary, Jammu and Kashmir said in a press conference here.
"The government thanks the people of Jammu and Kashmir for being cooperative and helping in maintaining peace and public order," he added.
Kansal also told reporters that the restrictions in Jammu and Kashmir were placed to ensure threats from the foreign aided terrorist elements.
"In the light of the important constitutional changes that were made in relation to Jammu & Kashmir in August, a number of restrictions were imposed from August 4, in order to prevent externally aided terrorists from disturbing peace and inflicting casualties on innocent citizens," the principal secretary added.
"It is now a well established fact that there have been sustained attempts from across the border, both in the past and more so in the last two months, to promote militancy and terrorism in Jammu and Kashmir in order to create a sense of fear and terror among the people and keep the place in a disturbed condition. It is also a fact that the attempts from across the border to disturb normal life continue," he said.
Speaking about the motive behind these attacks, Kansal said, "These terrorist attacks are meant not only to cause large scale damage to life and property but also create an atmosphere of fear and terror among the people of Jammu and Kashmir, the vast majority of whom are peace-loving. Banned organizations such as Lashkar-e-Toiba, Jaish-e-Mohammed, Hizbul Mujahideen continue to make attempts to terrorise the people of Jammu and Kashmir."
The Principal Secretary also said that postpaid mobile services will be functional from Monday and added that restrictions on movement have been removed in 99 per cent of the area in Jammu and Kashmir in the press conference. (ANI)