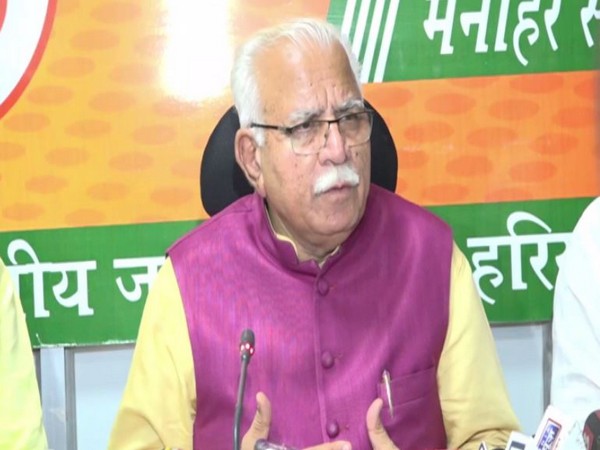 Chandigarh [India], Feb 1 (ANI): Hailing the Union Budget as a visionary, pro-poor and future-friendly budget, Haryana Chief Minister Manohar Lal Khattar on Saturday said the special focus on farming, MSMEs and social welfare sectors would help to improve the lives of the people.

Khattar said that the significant Budgetary allocations and announcements for promotion of good governance and ease of living including the 16 point plan for farmers, relief to taxpayers, an extension of Ayushman Bharat scheme will have great synergies with the ongoing and planned efforts of the state government in these important areas.
He congratulated Finance Minister Nirmala Sitharaman for presenting a "pro-poor, pro- farmers and pro-common man budget".
"The Chief Minister expresses confidence that the budget will boost the country's socio-economic development and also give a decisive upward push to economic growth. He highlighted the importance of raising the turnover threshold for an audit of MSMEs from 1 crore to 5 crore in this regard," a release said.
Khattar praised the Finance Minister on the announcement for selecting Rakhigarhi village in Hisar district to be developed as an iconic site with an on-site- museum.
"It is a matter of pride that now Rakhigarhi will be recognized internationally. Rakhigarhi is the historic city of Indus Valley Civilization," he said.
"This decision will not only place Rakhigarhi on the world map but will also increase the revenue of the State as it will be developed as a tourist destination and employment opportunities will also be created for the youth of the village," the Chief Minister said. (ANI)