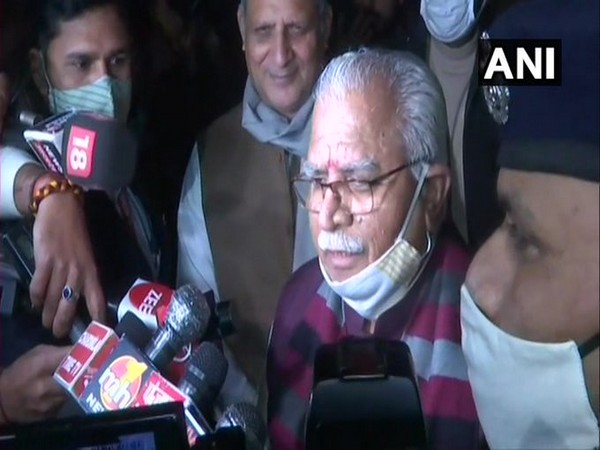 "The speculations by the Opposition and media are baseless. Our Government is going strong and will complete its tenure," Khattar told ANI.
The leaders discussed the prevailing law and order situation in Haryana in the view of farmers' stir.
"Today Supreme Court stayed the farm laws and formed a committee. All these were discussed. Events on January 26 should go well as it is a national festival. Farmers have assured in their press conference that it'll be peaceful. It's being hoped that they will call off agitation and go back home," he added.
Khattar had to call off his 'Kisan Mahapanchayat' in Kaimla village in Karnal on Sunday after the site was vandalised by protesting farmers.
Deputy Chief Minister and Jannayak Janata Party (JJP) chief Dushyant Chautala reiterated Khattar's statement and said, "I think the government (in-state) is going strong. As far as the farmers are concerned, each and every issue was discussed. Hopefully, the Supreme Court will resolve it."
JJP leader Chautala had earlier said that he will resign from his post in the Bharatiya Janata Party (BJP)-led state government if he is unable to ensure minimum support price (MSP) for the procurement of farmers' crops.
JJP is part of the coalition government with BJP in Haryana.
The Supreme Court on Tuesday stayed the implementation of three farm laws and asked the committee formed by it concerning the three farm laws to submit its report within two months.
The court said the first sitting of the committee, formed to listen to the grievances of farmers and views of the government, should be held within 10 days.
Farmers have been protesting at the different borders of the national capital since November last year, against the three newly enacted farm laws - Farmers' Produce Trade and Commerce (Promotion and Facilitation) Act, 2020; the Farmers Empowerment and Protection) Agreement on Price Assurance and farm Services Act 2020 and the Essential Commodities (Amendment) Act, 2020. (ANI)