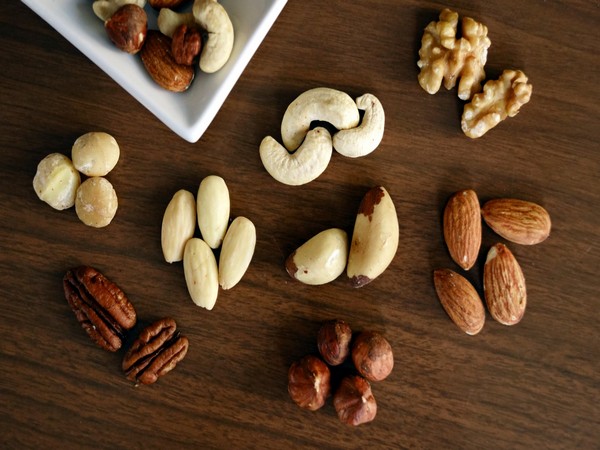 Washington [US], October 14 (ANI): A new study has shown that a high intake of alpha-linolenic acid (ALA) - found mainly in nuts, seeds, and plant oils - is associated with a lower risk of death from all causes, and specifically from diseases of the heart and blood vessels.

The findings of the study were published in the journal 'The BMJ'.
Higher ALA intake was associated with a slightly higher risk of death from cancer, but the researchers said further studies are needed to confirm this.
Alpha-linolenic acid (ALA) is a type of omega-3 polyunsaturated fatty acid found in plants, such as soybean, nuts, canola oils and flaxseed.
Previous studies have shown that a high ALA intake is associated with a lower risk of fatal coronary heart disease, but findings from other studies on ALA and the risk of death have been inconclusive.
To address this uncertainty, an international team of researchers analysed the results of 41 studies published between 1991 and 2021 on the associations between ALA and risk of death from all causes, cardiovascular disease and cancer.
Together, these studies involved around 120,000 participants aged between 18 and 98 years who were monitored for between two and 32 years, and they accounted for factors such as age, weight, smoking status, alcohol consumption, and physical activity.
After thoroughly assessing each study for bias, the researchers found that a high intake of ALA was associated with a 10 per cent, 8 per cent, and 11 per cent lower risk of mortality from all causes, cardiovascular disease, and coronary heart disease, respectively.
This is equivalent to 113 fewer deaths per 10,000 person years for all causes, 33 fewer cardiovascular disease deaths, and 23 fewer coronary heart disease deaths.
A higher intake of ALA, however, was associated with a slightly higher risk of cancer mortality, equivalent to 63 extra cancer deaths for the highest compared with the lowest levels of ALA intake.
A dose-response effect was found for dietary ALA intake and cardiovascular disease mortality, such that a 1g per day increase in ALA intake (equivalent to one tablespoon of canola oil or 0.5 ounces of walnut oil) was associated with a 5 per cent lower risk of cardiovascular disease mortality.
Higher blood levels of ALA were also associated with lower risks of mortality.
Due to the observational design of included studies, causality cannot be established, nor can the researchers rule out the possibility that other unknown factors or measurement errors of food and nutrient intakes might have affected their results.
Nevertheless, the use of stringent study inclusion criteria together with rigorous and systematic evaluation of study quality suggests their conclusions are robust.
As such, they say their study adds to evidence of the potential health benefits of polyunsaturated fatty acids.
And they concluded, "Further studies should examine the association between ALA and a wider range of causes of death to provide a more comprehensive assessment of the potential health effects of ALA as well as to examine whether specific foods rich in ALA are differentially associated with mortality from cancer and other causes."
A linked article summarises the current evidence on dietary intakes of different types of fatty acids and death.
Despite the beneficial effects of omega 3 fatty acids, it suggests that recommendations for intakes should be made cautiously because ALA intake might slightly increase the risk of cancer mortality. Further studies are, however, needed to confirm the increased risk. (ANI)