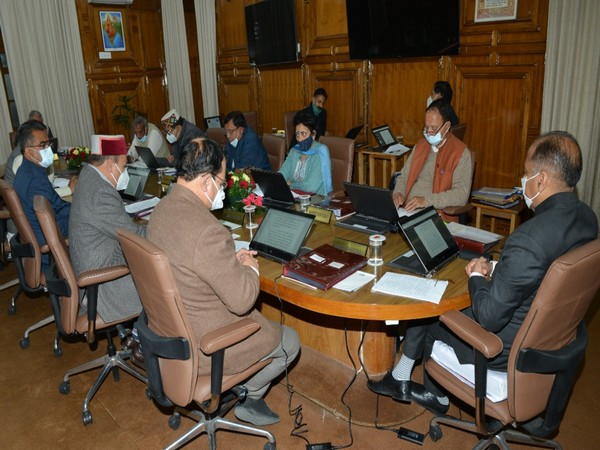 The State Cabinet in its meeting held here on Tuesday under the Chairmanship of Chief Minister Jai Ram Thakur decided to carry out amendments in Himachal Pradesh Municipal Corporation Act, 1994 and Himachal Pradesh Municipal Corporation Elections Rules, 2012, according to an official release by the state government.
These amendments would pave way for conducting elections to Municipal Corporations on party symbols, provide reservation for Other Backward Class (OBCs), provision of disqualification on grounds of defection, and strengthen provisions of the no-confidence motion.
It also gave its nod to the Governor's address to be delivered during the budget session of the Vidhan Sabha.
The Cabinet gave its approval to provide government land on a lease basis at the rate of Rs 1 per month for a period of 99 years in Mauja Dhaulakuan Tehsil Paonta Sahib district Sirmaur for the benefit of the farmers.
It gave its consent to construct additional accommodation at Rest House Sundernagar in Mandi district at a cost of Rs 3.90 crore to provide better boarding and lodging facilities to the employees and general public during official tours.
The Cabinet also decided to extend the special land acquisition unit at Nalagarh in Solan district and engage staff on a re-employment/fixed emoluments basis for a period of one year from January 1, 2021.
To ensure the safety of the people by motivating the people to adopt safe driving, the Cabinet approved the proposal to modify penalties/fines under Section 210A of the Motor Vehicles (Amendment) Act, 2019 as well as to specific authorities competent to compound the offences under Section 200 of the Act. It also agreed to extend the engagement of 2,555 School Management Committee (SMC) teachers already engaged under SMC teachers Policy in Elementary and Higher Education Departments for the academic session 2021-22.
The Cabinet gave its consent to rename Government Senior Secondary School Manoh in Hamirpur district as 'Shaheed Ankush Thakur Government Senior Secondary School, Manoh' as a mark of respect to the Galwan 'martyr' Ankush Thakur.
Moreover, it has decided to implement Mukhya Mantri Krishi Kosh Scheme for Farmer's Producer Organisations (FPOs)-2020 for providing incentives, concessions, and facilities for eligible FPOs of the State. Under the scheme, FPOs could avail seed money upto 30 percent of the total project cost with a maximum ceiling of Rs 6,00,000 or one and half times of equity raised by the FPOs, whichever was less. The scheme would also ensure credit guarantee cover for bank loan, interest subsidy etc. (ANI)