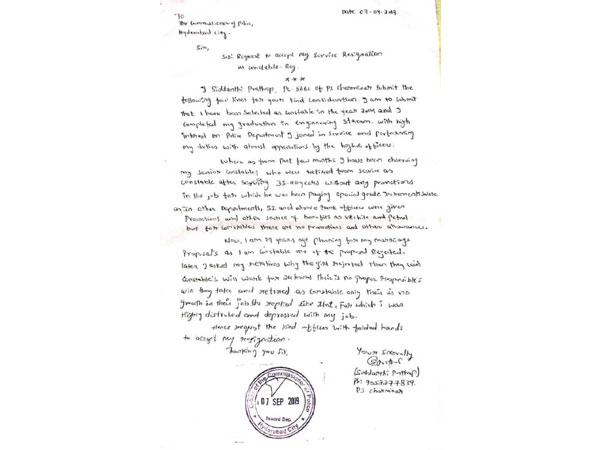 Hyderabad (Telangana) [India], Sept 13 (ANI): A 29-year-old police constable has submitted his resignation from the department stating that one of his marriage proposals was rejected by a girl citing 'irregular working hours and lack of career growth' in his job.

Siddanthi Prathap, who was posted as a Constable at Charminar police station submitted his resignation letter to Hyderabad City Police Commission on September 7.
He stated that he joined the police department in 2014 and is now looking to get married.
"I am 29-years-old now and planning for my marriage. Since I am a constable, one of my marriage proposals was rejected. Later when I enquired about the reason of rejection I was told that the girl rejected me because constable work for 24 hours and there is no growth in their job. Because of her reply, I was highly disturbed and depressed with my job", read the letter.
Prathap further claimed that constables even after serving for 35 to 40 years remain at the same position and they do not get any promotion or any other facilities.
"From the past few months, I have been observing my senior constables who were retired from service as constable after serving 35-40 years without any promotions in the job... In other departments, Senior Inspectors and above rank officers were given promotions and other benefits as vehicle and petrol but for constables, there are no promotions and other allowances," he claimed in his letter.
Speaking to ANI, Prathap said he was disturbed and submitted his resignation.
"I submitted my resignation on September 7 to the Hyderabad Police Commissioner and was waiting for a reply from him. There is a lack of promotion and facilities for constables in the department and I have urged the Commissioner to look into the matter," he said. (ANI)