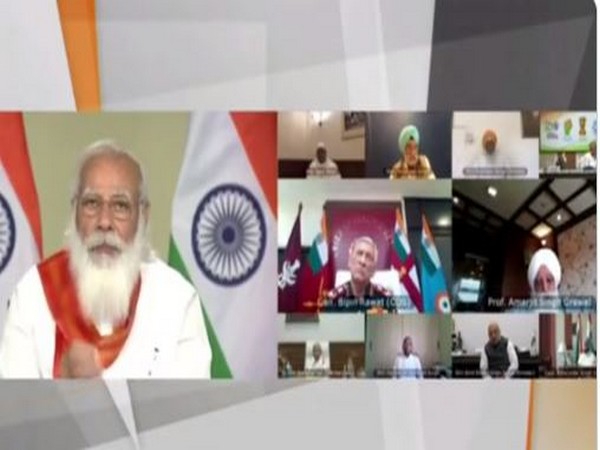 New Delhi [India], April 8 (ANI): It is important to make the younger generation understand the lessons from the life of Guru Tegh Bahadur for which digital means should be used, said Prime Minister Narendra Modi on Thursday.

"It is important to make the younger generation understand these lessons. It is easier to reach out to the younger generation world over to spread the message through digital means," PM Modi said during a meeting of the High-Level Committee (HLC) via video conferencing.
"The occasion of the 400th Prakash Purab of Sri Guru Tegh Bahadur Ji is a spiritual privilege as well as a national duty," he added.
As per a statement, the participants of the meeting thanked the Prime Minister for his grand vision and recalled the various contributions and sacrifices for religious freedom by Sri Guru Tegh Bahadur Ji.
In the meeting, PM Modi shared teachings and lessons learned from the life of the spiritual leader and said that the Sikh Guru tradition is a complete life philosophy in itself.
He also informed that in order to connect more and more people to commemorate the 400th Prakash Purab of Sri Guru Tegh Bahadur Ji, various activities will be organised throughout the year.
"The organisation of activities should be such that not only the life and teachings of Sri Guru Tegh Bahadur Ji but of the entire Guru Tradition is propagated world over. Proper research and documentation on this aspect of the Sikh tradition should be done," he added.
Participants of the meeting included former Prime Minister Dr Manmohan Singh, Union Home Minister Amit Shah, Lok Sabha Speaker Om Birla, Rajya Sabha Deputy Chairman Harivansh and Leader of Opposition, Rajya Sabha, Mallikarjun Kharge, among several others. (ANI)