Imran Khan's puppet government does not care about public as people did not choose it: Bilawal Bhutto 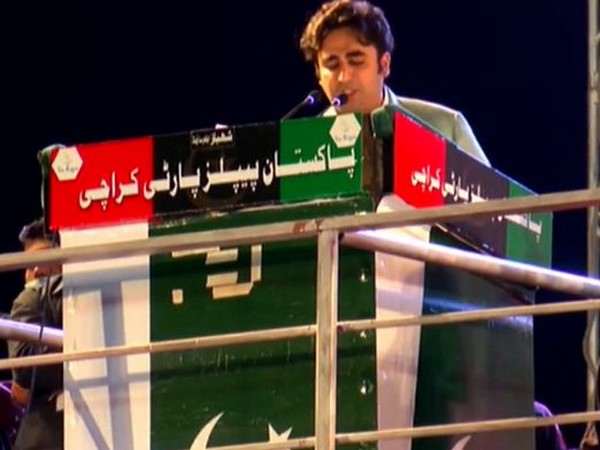 Karachi [Pakistan], October 19 (ANI): Pakistan People's Party (PPP) Chairperson Bilawal Bhutto-Zardari lashed out at Prime Minister Imran Khan for claiming to be a torchbearer of democracy and said that he does not care about public as he was chosen by selectors and not people.

While addressing the Sunday's anti-government rally in Karachi, Bilawal also paid tribute to his late mother Benazir Bhutto and people who died during the Karsaz attack 13 years ago.
"You must have heard of the Rs 1000 billion...Out of that Rs 300b is from Sindh's ADP (Annual Development Programme) and Rs 100b is from the ongoing projects from the tenures of [former president] Zardari and [former prime minister] Nawaz Sharif," he said.
While referring to the Pakistan Island Development Authority, he said that they "promulgate ordinances under the cover of the night to usurp Balochistan and Sindh's islands".
"I demand this be withdrawn," he said while demanding the party's senators to pass a resolution against it in the next Senate session that is scheduled to be held on Wednesday.
He further said, "This incapable and clueless prime minister will have to go home...Today, innocent people are being killed, going missing and our state is involved in this. Education, health budgets are being cut but this puppet government doesn't care because it didn't come from people's votes."
Dawn reported the PPP chairperson alleging that neither did Prime Minister Imran acknowledge the parliament nor could he see the hunger and tears of people, "And he claims to be [the torch-bearer of] democracy?"
"A one-man government is a contradiction of democracy. The public will ruin this man's arrogance...He should remember the dictators who came before him," he added.
While slamming Imran Khan, the PPP Chairperson said that history has always proved that even the biggest dictators couldn't survive. "What standing does this puppet have?... This is not a new fight but this will be a decisive fight," he said.
"Today we are fighting the same powers who want to shut down the poor's stove, who want to imprison people who ask for their rights, who come to power not through people's votes but through non-democratic forces. Once again these forces are uniting and we have to fight them, we have to fight them everywhere, in parliament, in the streets, even in prison," Bilawal said.
"If they don't let us speak in parliament, we will go out on the streets. If they lock us up in prison, how many people will you jail?" he questioned. "Has anyone ever succeeded in locking up a sea?" he asked the crowd.
While concluding his speech, Bilawal said that the PDM wants a "real democracy" in the country where "governments are made by people's votes and not selectors."
"The freedom to speak, to breathe, to live a life of dignity and freedom from poverty --democracy is the answer to all of this," he added.
Among the list of leaders who showed up at the 'jalsa' were JUI-F chief Maulana Fazlur Rehman, PPP chairman Bilawal Bhutto Zardari, PML-N vice president Maryam Nawaz, former prime minister Shahid Khaqan Abbasi, Ahsan Iqbal, Maulana Shah Owais Noorani, Allama Sajid Mir, Dr Abdul Malik, Iftikhar Hussain, Ameer Haider Khan Hoti, Dr Jehanzeb Jamaldini.
This is the second power show of the 11-party opposition alliance PDM (Pakistan Democratic Movement). The first was held in Gujranwala in Lahore. (ANI)