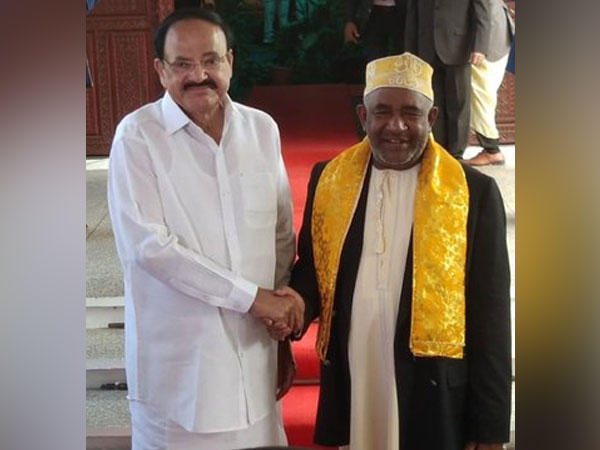 India also told Comoros that New Delhi's constitutional decision on Jammu and Kashmir is purely an internal matter. Moroni, on the other hand, backed India's move saying "you are the inheritors of the wisdom of Mahatma Gandhi."
Other agreements signed seeks to cement cooperation in the fields of health and medicine, arts and culture and tele-education (e-Vidya Bharati) and tele-medicine (e-Arogya Bharati).
MoUs on exemption of visa for diplomatic and official passport holders for short visits and protocol on foreign office consultation were also inked.
Vice President M Venkaiah Naidu and Comorian President Azali Assoumani witnessed the signing of these MoUs.
On the second day of his tour to the African nations of Comoros and Sierra Leone, the Vice President held extensive talks with Assoumani on a host of issues of common interest to both countries and sought to deepen the bilateral relations.
During the delegation-level talks, Naidu said that the recent decision in regard to the re-organisation of Jammu and Kashmir is purely an internal matter of India and does not change any external border.
The Vice President said the decision was made to focus on accelerating the development of Jammu and Kashmir.
Pointing out that Jammu and Kashmir was an integral part of India, he said that the decision was approved by two-thirds majority in the Rajya Sabha and four-fifths in the Lok Sabha.
In his remarks, Assoumani said: "On Jammu and Kashmir, we fully trust India because you are the inheritors of the wisdom of Mahatma Gandhi."
The Vice President called for enhancing defence ties in the maritime domain between India and Comoros as part of collaborative security architecture in the Indian Ocean.
Naidu also thanked the Comorian President in the fight against terrorism as well as for reforms in the UN Security Council, including its continued support to India's candidature for a permanent seat in the UN Security Council.
The Vice President said that India always believed in maintaining peaceful and friendly relations with all its neighbours, but said that one of its neighbours was aiding, abetting and funding terrorism, in a veiled reference to Pakistan.
In an extraordinary gesture of friendship, the Comorian President conferred the 'Order of the Green Crescent', the highest civilian honour of the island country, on the Vice President.
Naidu said he accepted the award on behalf of 1.3 billion Indians.
He also announced that India will be gifting medicines and medical equipment worth USD 1 million, another USD 1 million for transport vehicles and USD 2 million for the procurement of high-speed interceptor boats and 1000 MT of rice.
The Vice President also announced a Line-of-Credit of USD 41.6 million for setting up an 18MW power plant in Moroni and a vocational training centre. (ANI)