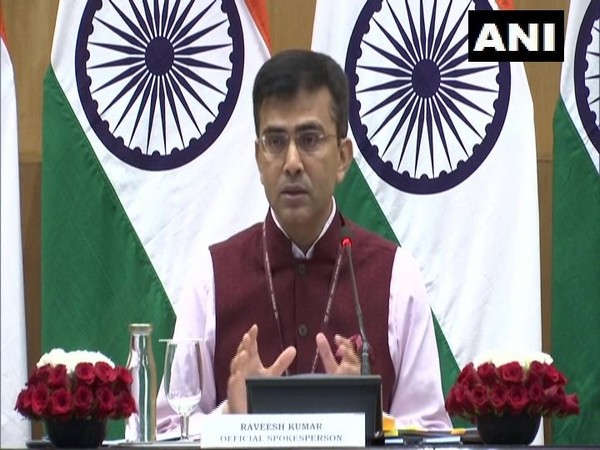 New Delhi [India], Sept 12 (ANI): India on Thursday asked Pakistan to "reconsider" its decision to charge USD 20 as service charge from pilgrims to visit the Kartarpur Sahib Gurudwara in Pakistan.
Pakistan on Thursday said that pilgrims will be charged USD 20 as service charge for visiting the Kartarpur Sahib Gurudwara.
Addressing media here, External Affairs Ministry spokesperson Raveesh Kumar said that India had gone to hold talks with an "open mind" to resolve all issues.

"That is where Pakistan kind of insisted that there has to be a fee of USD 20. It was not discussed. Since then, we have requested them that look this is to be reconsidered. This is in the interest of pilgrims, you can't charge somebody who is going on a pilgrimage," Kumar said.
He added that India has asked Pakistan to reconsider this decision.
Pakistan on Thursday said that pilgrims will be charged USD 20 as service charge for visiting the Kartarpur Sahib Gurudwara.
Kumarsaid that India has urged Pakistan to show "some flexibility" on the Kartarpur Corridor so that there cannot be any hindrance in the run up to the celebrations of the 550th birth anniversary of Guru Nanak Dev.
"The third joint secretary level meeting that took place on September 4 at Attari in Punjab, this was to basically discuss the modalities and also finalise the modalities for facilitation of pilgrims to visit the Gurdwara Darbar Sahib Kartarpur," Kumar said.
"We had hoped that all pending issues will be resolved. However, we realise that Pakistan was quite inflexible during the talks and there are three instances where we approached them to show some flexibility," he added.
Kumar stated that Pakistan did not agree to the initial number (10,000) of pilgrims which India had proposed.
"That was not agreed to by them. They cited some constraints on the infrastructure side, but we did request them to show some flexibility on this," he said.
Kumar said that India remains committed to the Kartarpur Corridor.
"We are on schedule. We are confident that all our projects will be completed before the scheduled time. We have urged Pakistan to show some flexibility. It is involving the sensitivity of the people," Kumar said.
"It is a long pending demand and we have urged them that Pakistan has to show a little bit of flexibility on this matter so that we can proceed without any hindrance in the run up to the celebrations involving 550th birth anniversary of Guru Nanak Dev ji," he added. (ANI)