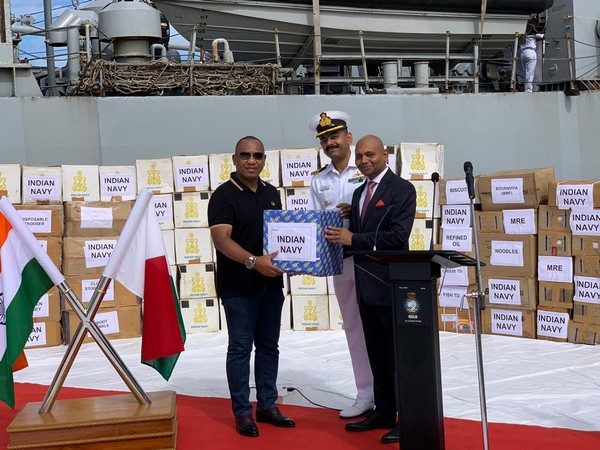 The relief material, which includes food items, clothing, and other essential consumer goods, had arrived at the port of Antsiranana on Indian Naval Ship Airavat on Friday, as per an official release.
Ntsay accepted the relief material from the Indian Ambassador in the presence of Commander Sunil Sankar, officers and men of INS Airavat at a brief function held at Antsiranana Port.
Indian Naval Ship Airavat carrying the relief material had been diverted to Madagascar after the country was ravaged by torrential rains and floods.
The relief materials include rice, lentils, tea, cooking oil, flour, instant food, chocolate, milk powder, cheese, biscuits, jam, clothing, tarpaulin, tents, bed-spreads, blankets, shoes, essential consumer goods, disinfectants, flash lights, personnel protective equipment etc. In addition to the above, it also includes medicines to treat the diseases which might occur in the aftermath of floods. The medicines shall cater to a large number of patients.
Speaking on the occasion, Kumar said that India stands with Madagascar in this hour of need. "We are two neighbours connected by the ocean. Our quick action to divert INS Airavat to support flood relief operations in Madagascar speaks louder than our words. India has always stood with its neighbours, whether land or maritime and will always continue to do so. We are often the first country to extend help whenever a neighbour faces a natural disaster.
Speaking in turn, Ntsay expressed his deep gratitude for the aid and remarked, "This moment is witness to excellent relations between India and Madagascar, it is a historic relationship and we are very proud of witnessing today this solidarity, generosity and brotherhood between the two countries."
The ceremony was attended by senior civil and military dignitaries in addition to the Prime Minister and his delegation.
Airavat is scheduled to depart Antsiranana on Sunday. (ANI)