India has made adequate deployments in response to Chinese troop mobilisation along LAC: Rajnath 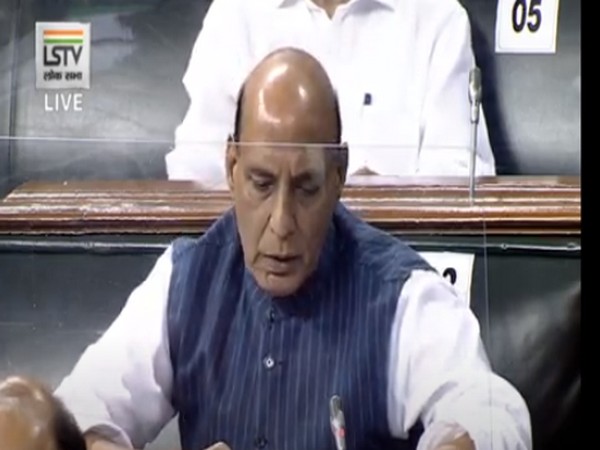 New Delhi [India], September 15 (ANI): Defence Minister Rajnath Singh on Tuesday said that the Chinese side has mobilised a large number of troops and armaments along the Line of Actual Control (LAC) and asserted that Indian armed forces have made adequate counter deployments in response to China's actions.

"As of now, the Chinese side has mobilized a large number of troops and armaments along the LAC as well as in the depth areas. There are several friction areas in Eastern Ladakh including Gogra, Kongka La and North and South Banks of the Pangong Lake. In response to China's actions, our armed forces have also made adequate counter deployments in these areas so that India's security interests remain fully protected," Singh said
"The House must remain confident that our armed forces will face this challenge successfully, and we are proud of them for this. The situation that persists now involves sensitive operational issues. Therefore, I would not like to reveal more details about this and, I am confident, this House will understand this sensitivity," he said.
The Defence Minister said India is committed to resolving the current issues in border areas through peaceful dialogue and consultation.
He also highlighted that he has put forth Indian's concerns to his Chinese counterpart in Moscow on September 4.
"To achieve this objective, I met my Chinese counterpart in Moscow on September 4 and we had an in-depth discussion. I clearly put our concerns before the Chinese side, which was related to their deployment of large numbers of troops, aggressive behaviour and unilaterally changing the status quo (which violated bilateral agreements)," Singh said.
"It also clarified that we want to resolve this issue peacefully and we want the Chinese side to work together with us. At the same time we also made it clear that we are fully committed to protecting the sovereignty and territorial integrity of India," he said.
Singh said External Affairs Minister S Jaishankar thereafter met the Chinese Foreign Minister in Moscow on September 10.
"The two have reached an agreement that, if implemented sincerely and faithfully by the Chinese side, could lead to complete disengagement and restoration of peace and tranquility in the border areas," he said.
The minister said in the past too, India has had situations of prolonged stand-offs in border areas with China which were resolved peacefully. "Even though the situation this year is very different both in terms of the scale of troops involved and the number of friction points, we remain committed to the peaceful resolution," he said.
The two countries have been engaged in a standoff since April-May and China has refused to vacate locations in the Finger area and other friction points in the Eastern Ladakh area.
Multiple rounds of talks have also failed to yield any significant result in defusing the tensions and now the Indian side has prepared itself for long-term deployment in the high mountainous region. (ANI)