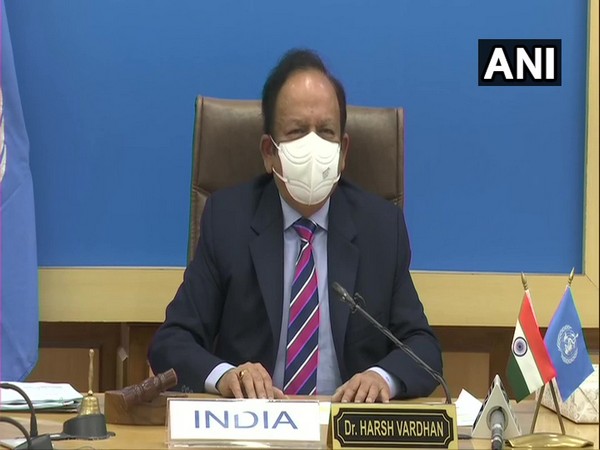 New Delhi [India], June 11 (ANI): India has ably demonstrated that strong political leadership is most critical to address inequalities and gaps in epidemic response, said Union Health Minister, Dr Harsh Vardhan on Thursday as he emphasised on the need to achieve zero new transmission of HIV to eradicate AIDS.

The Union Health Minister made these remarks at the 75th session of the United Nations General Assembly (UNGA), through video conference. He also spoke on Resolution 75/260, which concerns the Implementation of the Declaration of Commitment on HIV/AIDS and the political declarations on HIV/AIDS.
During his address, the minister said India took swift and timely action by involving communities, civil society and development partners to mitigate the impact of COVID on HIV services. "In India, the HIV and AIDS Prevention and Control Act, 2017, provides a legal and enabling framework to safeguard the human rights of infected and affected populations."
India's unique HIV prevention model is centered around the concept of 'Social Contracting through which the "Targeted Interventions Program" is implemented with support from civil society, he said. The program is aimed at behaviour change, communication, outreach, service delivery, counselling and testing and ensuring linkages to HIV care, the minister added.
"India is providing free anti-retroviral treatment to close to 1.4 million people. Indian drugs are also reaching millions of people living with HIV in Africa," Dr Vardhan said while adding that India's National AIDS Control Program has been revised, revived and revamped to focus on hard-to-reach and at-risk populations.
"Viral Load Testing facilities have been scaled up, and HIV counselling, testing and community-based screening for early diagnosis have been ramped up to achieve the target of Elimination of Mother to Child Transmission of HIV."
In line with the motto of Indian government's motto, 'Together, for everyone's growth, with everyone's trust', the minister informed that the National AIDS Control Program has signed MoUs with public and private sector industries to mobilise their support for HIV prevention and treatment. India aspires to scale up HIV care to reach 100 per cent of people living with this dreaded disease.
"We are fully cognisant of the fact that with only 115 months to meet the target, we need to achieve zero new transmission of HIV if we are to deliver on the promise of ending AIDS in the next 10 years," he concluded. (ANI)