India not only meeting Paris agreement targets but also exceeding them: PM Modi 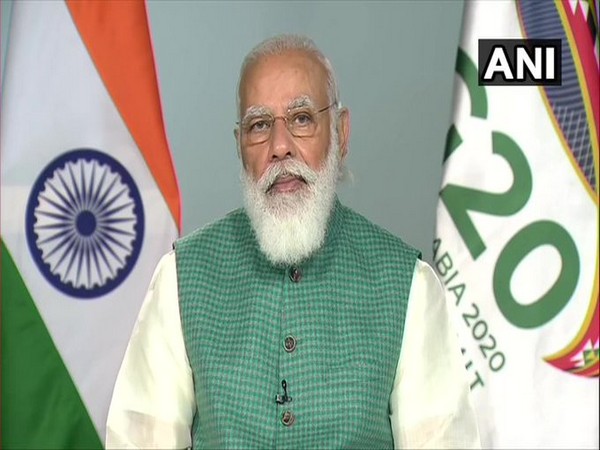 New Delhi [India], November 22 (ANI): Prime Minister Narendra Modi on Sunday said that India is not only meeting the targets of the Paris agreement on Climate Change but is also exceeding them.

Speaking at the G-20 Summit held via video conferencing, PM Modi also said that while the world currently is fighting the COVID-19 pandemic, it is "equally important to fight climate change in an integrated, comprehensive and holistic way".
"Today we are focused on saving our citizens, economies from the effects of the global pandemic. It is equally important to keep our focus on fighting climate change. Climate change must be fought not in silos but in an integrated, comprehensive and holistic way," he said.
"Inspired by our traditional ethos of living in harmony with the environment and commitment of my government, India has adopted low carbon and climate-resilient development practices. India is not only meeting our Paris Agreement targets but also exceeding them," he further said.
Prime Minister Modi said that India has taken "concrete action" in many areas where LED lights have been made "popular" and smoke-free kitchens have been provided to over 80 million households. "This is among the largest clean energy drive globally. There are efforts to eliminate single-use plastics. Our forest cover is expanding and the lion and tiger population is increasing," he said.
The Prime Minister said that India aims to restore 26 million hectares of degraded land by the year 2030 and added that "we are encouraging a circular economy."
India is making "next-generation" infrastructure such as; metro networks and waterways, he said adding that they would also contribute to a cleaner environment along with efficiency.
Prime Minister had also termed the Covid-19 pandemic as an important turning point in the history of humanity and the biggest challenge the world is facing since World War II.
Today, along with Prime Minister Modi, Chinese President Xi Jinping, US President Donald Trump, Australian Prime Minister Scott Morrison and, Japan PM Yoshihide Suga.
The Summit also saw the participation of heads of state or government of 19 member countries, the European Union, other invited countries and international organisations like the UN, IMF, FATF, OECD. (ANI)