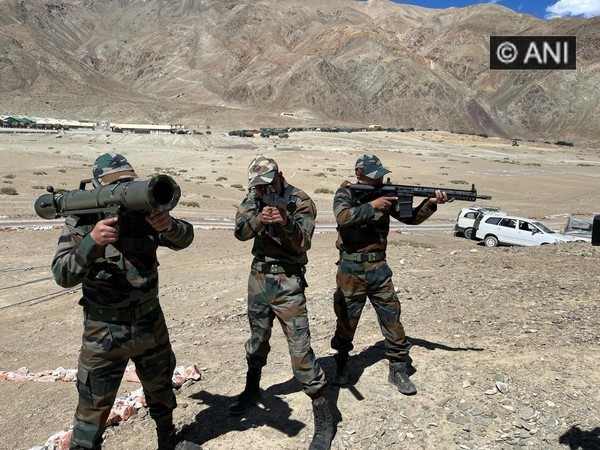 New Delhi [India], August 7 (ANI): Deployed along the Line of Actual Control for over a year to tackle Chinese aggression, Indian Army troops deployed at the forward bases have been armed with the latest American Sig Sauer 716 assault rifles and Swiss MP-9 pistol guns to guard the border there.

Team ANI reached forward areas to see the Indian Army preparedness along the LAC a few days after troops disengaged from the Gogra heights.
Army officials deployed in these high altitude locations said the troops are now getting the American Sig Sauer 716 assault rifles for operations as with its 500 meters range, it can prove to be an effective weapon in mountain warfare.
The rifles have been obtained in large numbers with India placing orders for around 1.5 lakh of them under emergency provisions soon after the situation worsened along the border due to Chinese aggression in Eastern Ladakh and especially the Galwan valley.
The rifles are ambidextrous and allow troops to use them easily, in case, they are required in operations, the officials said.
Meanwhile, India and China have disengaged troops from the Gogra heights area and moved them back to their permanent bases, in a step towards defusing tensions at the Line of Actual Control (LAC)
"The troops in this area have been in a face-off situation since May last year. One step at a time towards standoff resolution. As per the agreement reached during corpus commander talks, both sides have ceased forward deployments in PP-17 in a phased, coordinated, and verified manner," an Army spokesperson said.
The disengagement process was carried out over two days on August 4 and 5 and troops of both sides are now in their respective permanent bases.
The spokesperson said that all temporary structures and other allied infrastructure created in the area by both sides have been dismantled and mutually verified. The landform in the area has been restored by both sides to the pre-stand-off period.
This agreement ensures that the LAC in this area will be strictly observed and respected by both sides and that there is no unilateral change in the status quo.
"With this, one more sensitive area of face-off has been resolved. Both sides have expressed commitment to take the talks forward and resolve the remaining issues along the LAC in the Western Sector," the spokesperson said.
The spokesperson said the Indian Army along with ITBP is totally committed to ensure the sovereignty of the country and maintain peace and tranquillity along the LAC in the Western Sector.
In the 12th round of military talks, India and China had agreed to disengage troops from patrolling point 17A, one of the friction points between the two countries in the eastern Ladakh region.
Sources had earlier told ANI that during the 12th round of talks, there was an agreement between both sides to disengage from PP-17A also known as Gogra.
The last disengagement agreed and acted upon by both sides was in February this year when they disengaged from the banks of Pangong Lake. (ANI)