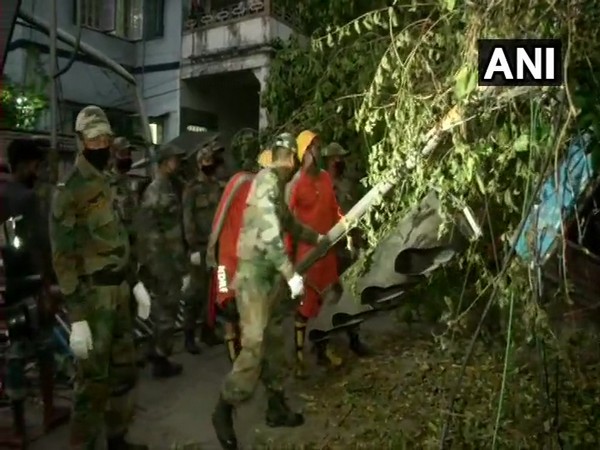 Kolkata (West Bengal) [India], May 23 (ANI): The Indian Army has taken up restoration work in Kolkata on the request of the state government. The cyclone Amphan caused extensive damage in several regions of West Bengal claiming 86 lives.

"The Army personnel have undertaken restoration work at South Avenue in Kolkata," said Defence spokesperson in Kolkata.
"Based on the request from the Government of West Bengal, the Indian Army has provided five columns to assist the Kolkata city civil administration in the aftermath of the cyclone. Five columns have been deployed by Army at Tollygunge, Ballygunge, Rajarhat/New Town, Diamond Harbour, Behala. We are equipped with road and tree-clearance equipment," the spokesperson added.
Earlier, the West Bengal government said it had called for Army support and was making efforts for immediate restoration of essential infrastructure and services.
"GOWB mobilizes maximum strength in unified command mode on 24x7basis for immediate restoration of essential infrastructure and services asap. Army support has been called for; NDRF and SDRF teams deployed; Railways, Port and private sector too requested to supply teams and equipment," the state government said in a tweet.
It said drinking water and drainage infrastructure was getting restored fast.
"PHE asked to supply water pouches in gap pockets. Generators being hired where necessary. More than a hundred teams from multiple departments and bodies working for cutting of fallen trees, which is the key to restoration of power in localities. WBSEDCL and CESC asked to deploy maximal manpower, even while lockdown significantly affects the deployment potential of the latter. Police on high alert," it added. (ANI)