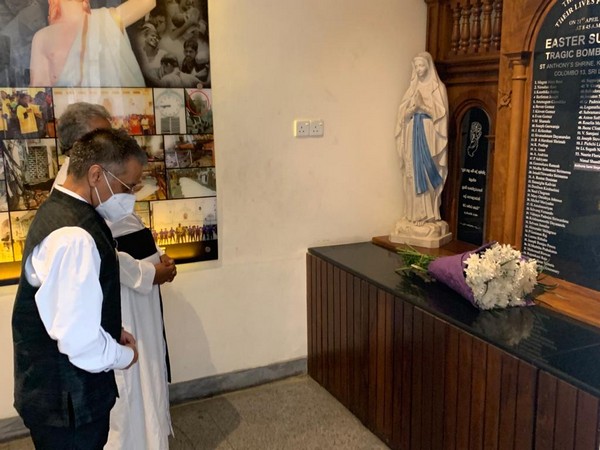 Colombo [Sri Lanka], May 23 (ANI): Newly appointed Indian High Commissioner of India Gopal Baglay visited Gangaramaya Temple and St Anthony's Church in Colombo on Saturday morning to pray to Lord Buddha for health, peace and prosperity of the people of Sri Lanka and India and their friendship and cooperation.

This was his first movement from his official residence after observing stipulated health protocols since his arrival on 08 May 2020 on a special flight carrying a gift consignment of medicines and medical items from India to Sri Lanka.
At the Temple, the High Commissioner was welcomed by Venerable Dr Kirinde Assaji Thero, who warmly recalled Prime Minister Narendra Modi's visit to the temple during the International Vesak Day Celebrations in 2017. He also showed the High Commissioner photographs of the significant visit displayed at various prominent places in the Temple.
Thero fondly recalled the time he spent studying in India and pointed out the importance of such ties the two countries share. The High Commissioner stressed the commitment of India's leadership to strengthen multifaceted ties, especially the historical and deep civilisational, religious and cultural bonds, with Sri Lanka.
Thereafter, the High Commissioner visited St. Anthony's Church to pay homage to the victims of last year's Easter Sunday terrorist attack. Recalling Prime Minister Modi's gesture of solidarity in visiting Sri Lanka and the Church at the first possibility after the attacks, Baglay prayed for peace, safety and security of the two countries.
The administrator of the Church Rev. Father Jude Raj blessed the people of the two countries with health and happiness. He also blessed the High Commissioner in his task to foster ever closer friendship between the two neighbouring countries.
"Reiterating solidarity expressed by leadership! On his first morning outside India House, High Commissioner paid homage to victims of #EasterSunday terrorist attacks at St. Anthony's Church, visited by PM Modi last year in wake of the attacks," the Indian High Commission wrote on its official Twitter page.
"He recalled that PM Modi's visit to the Church last year sent a strong signal of solidarity and guided even closer cooperation for peace and security between #India and #SriLanka," the Twitter thread added.
The High Commissioner reiterated India's abiding commitment to developing even stronger all-round cooperation with Sri Lanka, including in the sphere of people-to-people relations. (ANI)